Come Fly With Me

One of my favorite new shows is Pan Am on ABC.  I'm not sure the ratings are great, but I've been enjoying it because I used to run a private club for the aviation industry and the Pan Am Association used the club.  The Association was basically a group of Pan Am alumni who  had great loyalty to Pan Am.  There definitely was a culture at that airline that many former employees did not want to lose.

I'm also a fan of shows and movies set in the 50's and 60's, like Catch Me If You Can.  I love the uniforms the stewardesses wear in the show...yes, that's right, stewardesses, not flight attendants.  I know the pc term today is flight attendant, and that's the term I normally use, but you'd better not call a former Pan Am stewardess from that era a "flight attendant," because you will be corrected and fast!  Back in the day it was extremely prestigious to be a Pan Am stewardess or a pilot.  Of course, back in the day air travel was a little bit more luxurious than it is today.

Watching the show and seeing the stewardesses carrying their Pan Am bags reminded me of all the really cool airline swag I've collected over the years, much of it accessories.  Some of it I got as a kid and some of it I got working in the industry.  I didn't even realize how much I had until I started digging it out.  It's all collectible and I'm guessing more valuable if it's from a defunct airline.

My favorites are the bags.  I love them and was thinking I should use them, but I don't want them to get damaged.  I have one from SAS from when I was a kid traveling alone to Norway to visit friends.  I think the airline gave me the bag because I was alone, or they might have given it to me because I got stranded by myself in Denmark on my 12th birthday on the way home.  Not a fun experience for a child.  But, in true SAS fashion they took very good care of me.  They hired a babysitter, put us up in a luxury hotel and took us to the Tivoli Gardens amusement park for the night.  The second bag is a special limited edition from Jet Blue from when the airline was very young.  Jet Blue used the club a lot and I got to know some of the employees and one of them gave me the bag.  I was instructed to keep it quiet though, because they weren't being widely distributed.  It's been about ten years, but shhhh..... 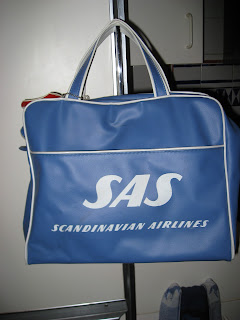 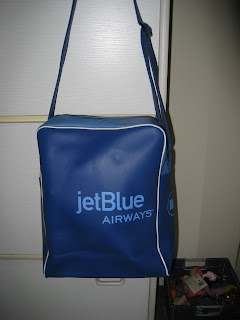 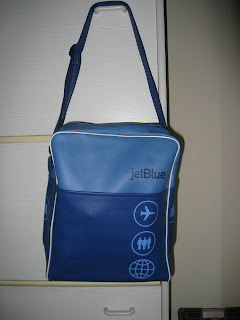 The flip side...
Fairly common in the airline industry are the pins/buttons.  Airline people hand them out pretty readily and everyone collects them.  I used to get a lot of them and sometimes, I'd get duplicates that I could trade or gift.  Some of them have really special meaning for me, like the one given to me by Russian Cosmonauts who were visiting the club, and the ones from the U.S. Air Force/Air Mobility Command when I took a trip with them and visited two Air Force bases and got to fly the boom on a refueling tanker while we refueled the stealth bomber in midair!  Other cool ones are from Boeing, Boeing Security, Delta, the Department of Transportation (DOT), and Jet Blue to name a few.  If you are familiar with Jet Blue you will notice that the two buttons pictured have the same patterns as the tails on their planes.  As you will see some of them are still in their sealed plastic wrappers.  Whatever came sealed, I left that way.  If you are a collector you don't remove them, because the value is highest if they are in mint condition in a sealed wrapper. I also have my vintage wings from traveling as a kid.  One says "Jr. Stewardess" and another says "Junior Clipper Pilot" If any of you still have your wings, send photos! 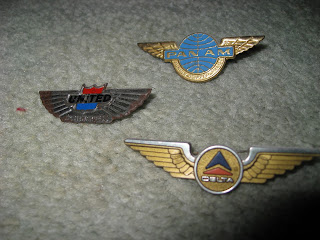 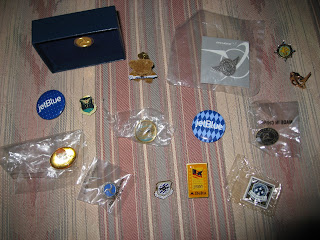 Assorted pins from the aviation and aerospace industry
Once in a while, because of my position, I would get something kind of neat, like the Jet Blue bag.  On one occasion I was working on a huge event involving Boeing so when my counterpoint on the Boeing end came in he brought me a cute bracelet and a lovely silk scarf.  (Boy were my employees jealous!) The bracelet was made especially for Boeing and came with a little card that tells about the bracelet.  Again, a very important addition if you are a collector because it authenticates the piece.  The scarf has a vintage Boeing aircraft on it, in fact the first aircraft Boeing ever made.  (The diagonal striations on the scarf are wrinkles, not damage.  It's in perfect condition.  If I wanted to wear it I would iron it, but I didn't want to fool with it just to take a photo.)  If I ever have enough wall space I might frame it and hang it.  I think it's a great conversation piece. 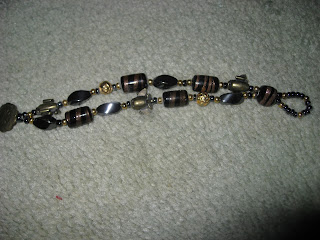 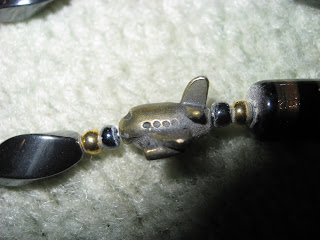 Close up of the airplane charms 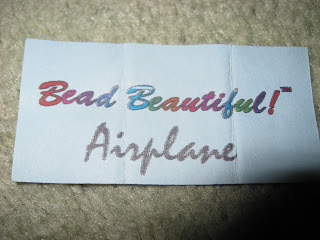 Card with the bracelet 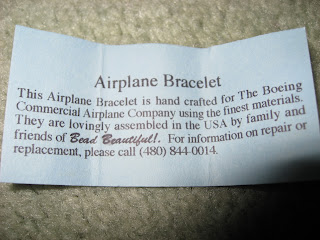 Back of the card 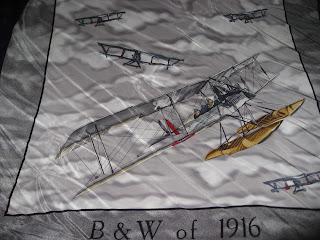 Boeing scarf
The next time you travel don't forget to ask the airline for souvenirs.  Many of them operate on shoestring budgets these days, but I'll bet there are pins floating around and if you ask you might get.  With the frequency with which airlines come and go, that pin might be a collector's item sooner than you think.﻿
﻿
﻿
﻿
﻿
﻿
﻿
Posted by Alison & Barbara at 9:39 AM