A big trend in the mid 20th century that extended well through the 1970's was getting multiple uses from a single garment.  You can still find this today, but I don't think the concept is quite as popular as it once was.  My mother still talks about the fabulous reversible clothes she had as a child and as a young woman!  The idea of getting multiple uses from an item was also very popular in jewelry in the 1960's and 70's.  As with clothing, this still exists today, but not as prevalent as it once was.  From watches to earrings to rings, changeable bands and stones increased the allure of a single piece of jewelry and added value.

I was particularly fascinated with the changeable rings as a kid.  My mother has a fabulous one from well known costume jeweler Trifari that I liked to play with.  She thinks she got it in the 1960's.  I discovered it years later when I was digging around in her jewelry box in the 1970's (one of my favorite activities as a little kid when I had nothing else to do).  I remember being told to make sure I didn't lose any of the stones.  One of the cool things about the stones was that they are apparently magnetized, which was how they stayed put in the case.  They would sort of wiggle around in their spots when I opened the case, and I loved that. Vintage Trifari changeable ring
Because I was so enthralled with the Trifari ring, and my mother was afraid I was going to lose the pieces (more chance she would have since I'm the careful one), she got me my own of lesser quality to play with.  One set may have originally been hers as well.  It is a simple Sarah Coventry ring with four colored beads or "pearls."  Sarah Coventry jewelry was sold the way Avon was in those days, at home parties.  The ring is marked "Sarah Cov" which was the mark the company used in the 1970's, which makes it easy to date. 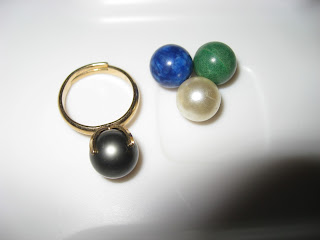 Vintage Sarah Coventry changeable ring
My mother, or maybe both parents, also gave me another interchangeable ring that they bought just for me.  This one has three stones that are irredescent and look like mini disco balls.  I'm guessing I never wore it out of the house, but it was fun to play with as well. 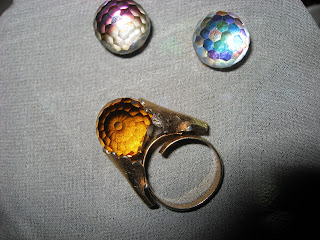 Vintage changeable ring
Of note is that all three of these rings are adjustable, a feature I've found in many vintage costume rings.  I don't know if there is a formal name for these rings beyond the changeable moniker popularly used, but I think of them as chameleon rings because they change color by popping in a new bead.  The Trifari set is a great travel piece, because the one ring goes with every outfit.
If any readers have vintage changeable rings I'd love to see photos and maybe I'll even post them.﻿
Posted by Alison & Barbara at 6:25 AM