Yesterday Liberty, today Hermes & Chanel....My father loved his Liberty of London ties always, but on a trip to Europe he bought himself some Hermes and Chanel ties and Hermes became another favorite for him.  It was great, because we had a second gift option for him for Father's Day!  He ended up with a small collection of beautiful Hermes ties that are now vintage.  They're not as brightly colored as the Liberty of London ties, but they are very elegant and come in a range of interesting patterns.  Many of the ones pictured here incorporate a horsey motif, either horses themselves or cleverly intertwined bits and bridles. 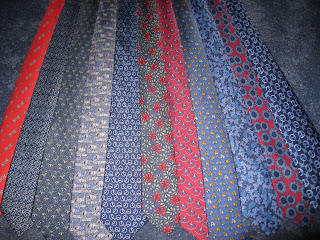 A selection of vintage Hermes ties 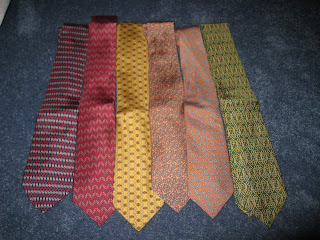 A few more that need to be pressed 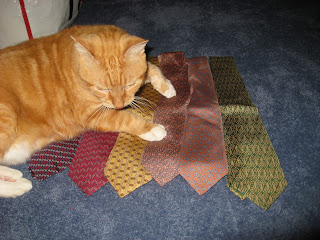 The presser arrived and at first he appeared to be helping by patting them down
(notice the position of his paws)..... 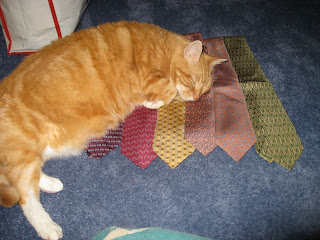 But, alas, he was actually flattening them to make a comfy bed for himself and was caught sleeping on the job.  It's true, you can't find good help these days.  Thankfully, he didn't harm them, because these are the ones I want to sell.
There are a few vintage Chanel ties thrown in for good measure.  Of couse they have the double C logo incorporated into the patterns.  Interestingly, while the Hermes ties are all made in France, the Chanel ties are made in Italy, even though Chanel is a French company. 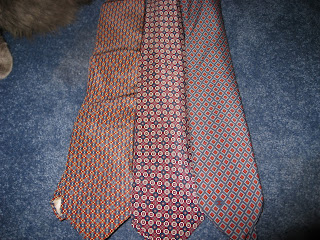 Vintage Chanel ties
I'm looking for ideas of what to do with the Hermes ties.  I once saw a skirt made out of them, but I don't have enough and I don't want to wear a crazy, multi-patterned garment, even if it is Hermes.  Maybe a teddy bear made of the ties?  If anyone has any suggestions let me know.  Below are close ups of the Hermes ties: 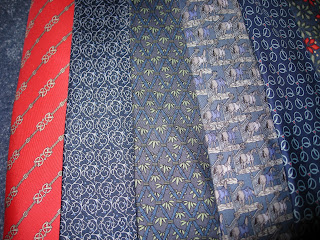 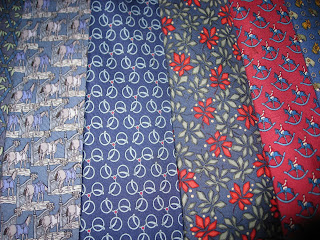 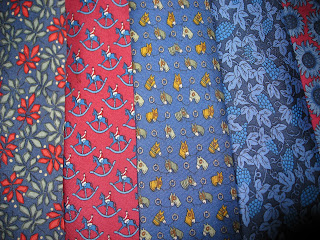 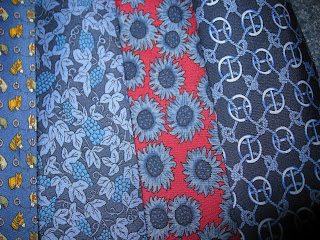