Proud of the Peacock

My first introduction to vintage jewelry was from my father.  He collected antiques and turned that interest into a small second business.  On the weekends he would go antiquing at antique shows, flea markets and garage/tag sales, often getting there at 6 am to be the first on line, because the first on line gets the best stuff.  He was mostly interested in fine China, but he sometimes purchased vintage jewelry.  Often the jewelry would be sold  in a lot, a big box of what appeared to be "junk" but could contain a small treasure.  By the time I would get up in the morning he would already be home with all his finds spread out on the dining room table, taking inventory.   If there was jewelry, I would zero in on that and learn about the pieces, their assumed value and era.  One time he brought home the peacock pin below: 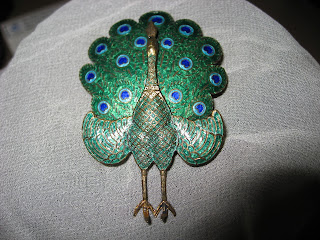 Vintage hinged peacock pin
This pin is sterling with a gold overlay, with beautiful green and blue enamel.  It is marked "Sterling" and "Siam" on the back.  Siam is what Thailand used to be called prior to 1939, and again between 1945 and 1949, which would make the pin 63 years old at the very youngest.  A unique feature is that the tail is hinged, so it can be lowered to be positioned at a 90 degree angle from the body.  Worn on the shoulder that way, it would appear that the peacock's tail is spread behind it. 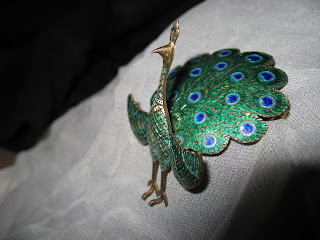 Tail down
This pin's hinged tail makes it a unique piece, although I don't think it's particularly rare.  I have seen the same and similar peacock pins for sale.  In fact there is currently one being offered on Ebay!  Authentic pins like this are being sold for up to about $100.  Considering my father paid $3 for it, that's a pretty good investment in a colorful and interesting vintage piece.
﻿
﻿
﻿
Posted by Alison & Barbara at 5:07 AM