Last time I visited de Grisogono I focused mainly on ladies' watches and bejeweled cuff bracelets (see my April 1st post), so this visit I took a look at some of the pieces in their men's collection and found some very cool things.  The first watch I looked at had a wood face which was unique and gave it an organic feel, but the gold frame kept it classic. 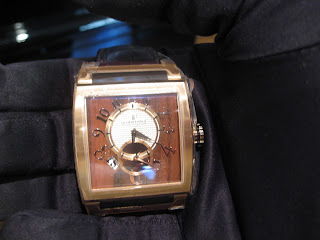 ﻿Then Store Manager Daniel Morales took off his watch to show me how the face flips over so it can keep track of three time zones.  Pretty nifty, especially for businessmen who do a lot of traveling.  Here's a video below.  It's a little noisy in the background because it was a fun event with lots of people, but you can see the demonstration.

After that I got a close up look at the Meccanico, the first watch to ever have a digital time display run by a mechanical power supply.  The face of the watch shows the time in digital and analogue.  The band is black rubber and looks very sporty.  Despite the casual style of this watch, it is so special that it comes with a pricetag of $500,000!﻿  If you live near a de Grisogono boutique you should go in just to see this rare watch. 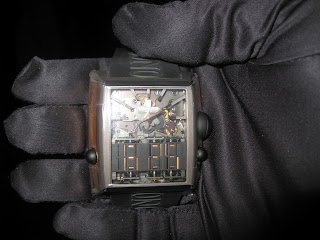 Of course I had to try on one ladies watch because I can't resist sparkly diamonds﻿: 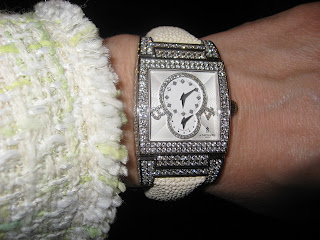 A beautiful, girly watch for me...lots of diamonds﻿

And, just like during my last visit, Sales Specialist Jose Dominguez brought out some fabulous little animal themed sparklers, this time men's cufflinks.  They were adorable and would make a nice collection. I think women can wear them as well.  I loved them both, but I think my favorite were the pink pigs. 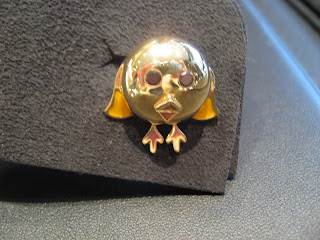 Cufflink with chick face on one side.... 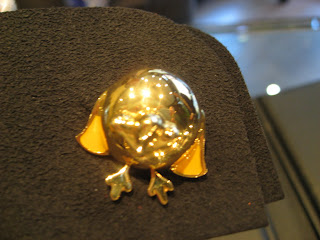 ...and chick posterior on the other 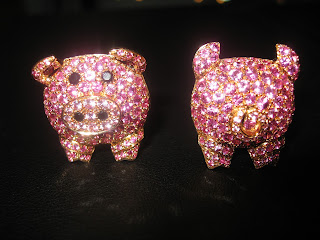 Supercute pig cufflinks with face and backside on each cufflink

Finally, just as I was getting ready to write this post I received a copy of the May issue of Avenue Magazine and found photo coverage of the last event I attended at de Grisogono, including a photo of me!  It's the event on the bottom of the page.  Click to enlarge. 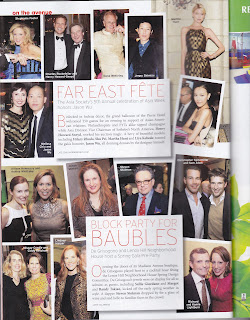