I was at the Doubles Club last week when my friend Stephanie Loeffler walked in wearing the most fabulous necklace with matching earrings.  The necklace was white and had three chains, one of which was sporting a very cool pendant.  And, against Stephanie's black dress the necklace really popped.  This is another terrific example of what I've said before about how one exceptional accessory can make an entire outfit, especially when worn against a very simple silhouette like a black dress. 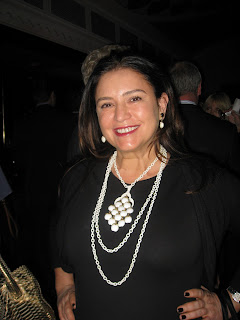 Stephanie is always wearing amazing accessories and, in addition to the necklace, she had on a very stylish pair of Louis Vuitton pointy toe shoes, also in white.  This style of shoe is very popular right now, as is the black & white color combination. 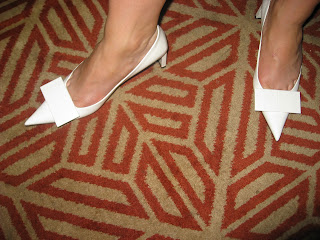 Of course, I had to get the scoop on who made the necklace and where she got it.  Stephanie told me it was vintage and she bought it in London.  She also said she was told that Meryl Streep wore one like it in the movie "The Devil Wears Prada."  I did a little research when I got home, and sure enough, Meryl Streep did wear one in the movie, but in a different color.  I think hers was green, but don't quote me on that.﻿  I also discovered that the necklace is by well known costume jeweler, Trifari, and is known as the Waterfall necklace.  The necklace was produced in the 1970's in several different colors including white, green and black.  There were also matching earrings.  I found a few photos on line. 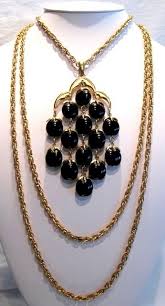 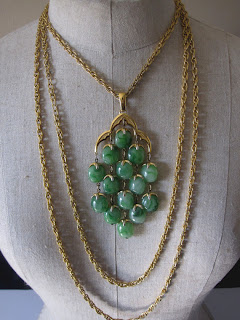 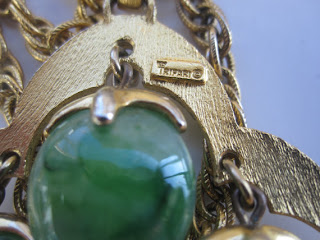 The Trifari stamp on the back makes this identifiable and collectible 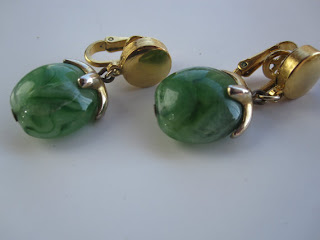 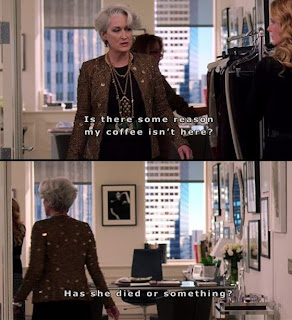 ﻿This necklace is a collectible piece because it is vintage Trifari, but the fact that the same style was featured in the movie makes it even more desirable.  I love it in the white, because it's so 'mod' and very retro!
Posted by Alison & Barbara at 2:39 AM