Booties are going to be HUGE for Fall.  They've been big for a while, but expect them to get even more popular as the temperatures dip.  With pants, skirts, dresses...seriously they're going to be everywhere.  In New York everyone wears black booties in Fall/Winter and this year my friends are buying them now, in the middle of summer, just to be ready.  I have a pair of black cage booties that I totally adore (and have blogged about before), but they're all open so wearing them when it's extremely cold or if there's snow on the ground isn't possible, so I decided I need a stylish pair that I can wear all Winter.  My lifestyle involves a lot of events so I need my booties to be versatile enough to wear even under a ballgown.  I was walking down Madison Avenue last week and spotted the perfect pair of patent leather ones in the window at Chanel and fell in love.  I don't believe in love at first sight, except when it comes to shoes.  I knew I had to have them, but also knew they were going to cost a small fortune, which I can't afford right now.  Luckily I had enough bonus points earned on my credit card to get a gift certificate to Saks to cover most of the cost, so I bought them at Saks. 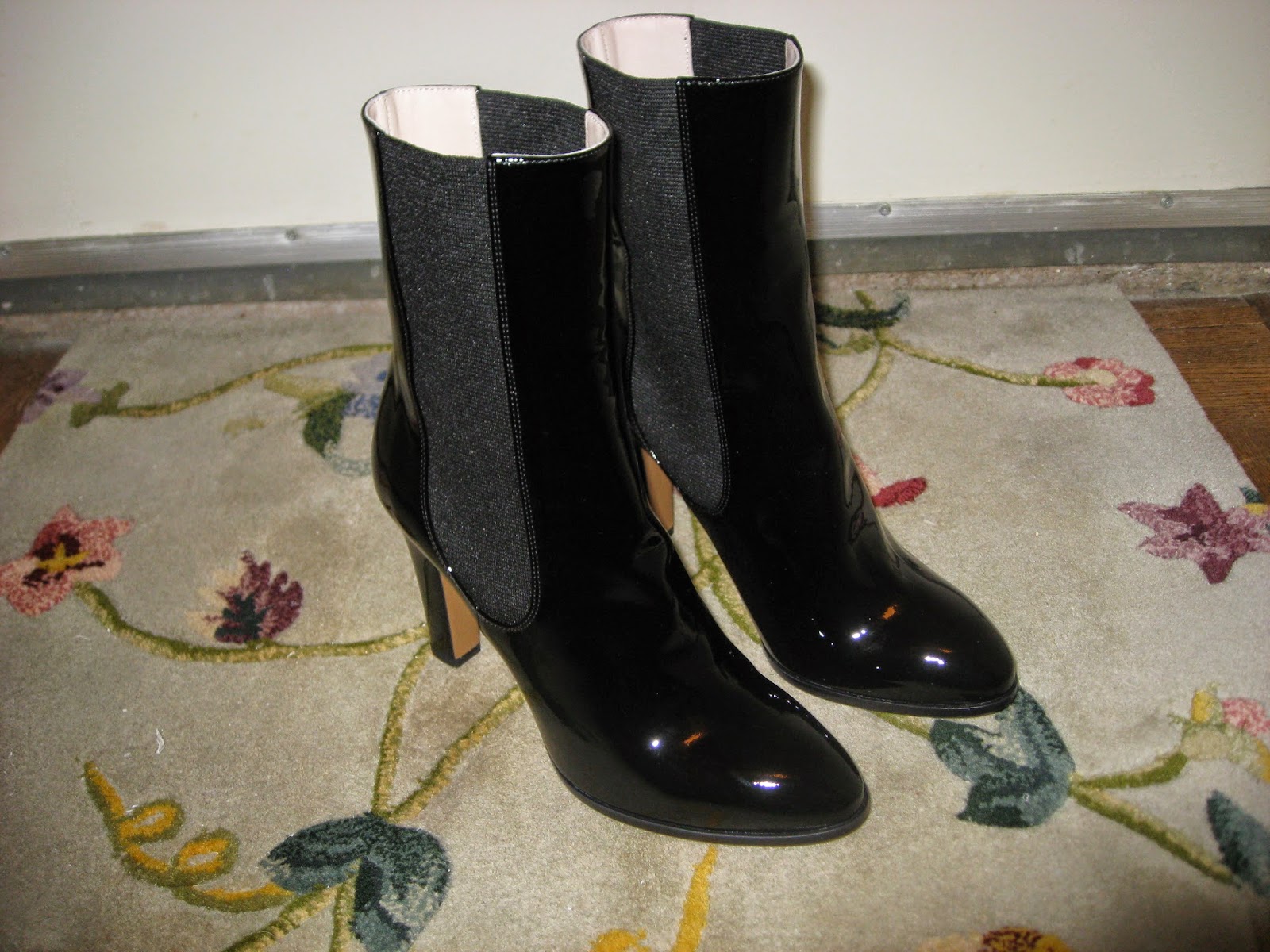 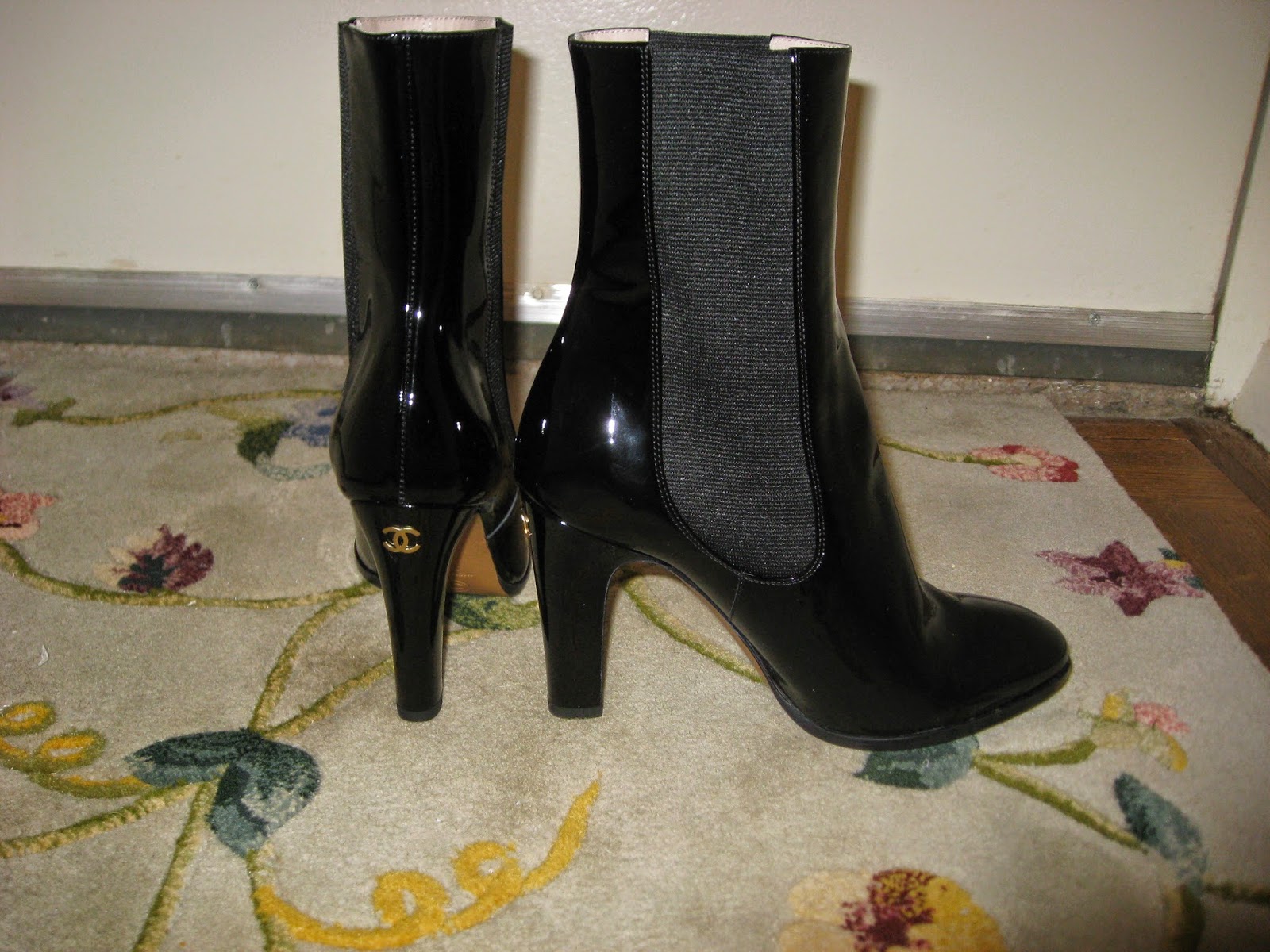 Side and back view 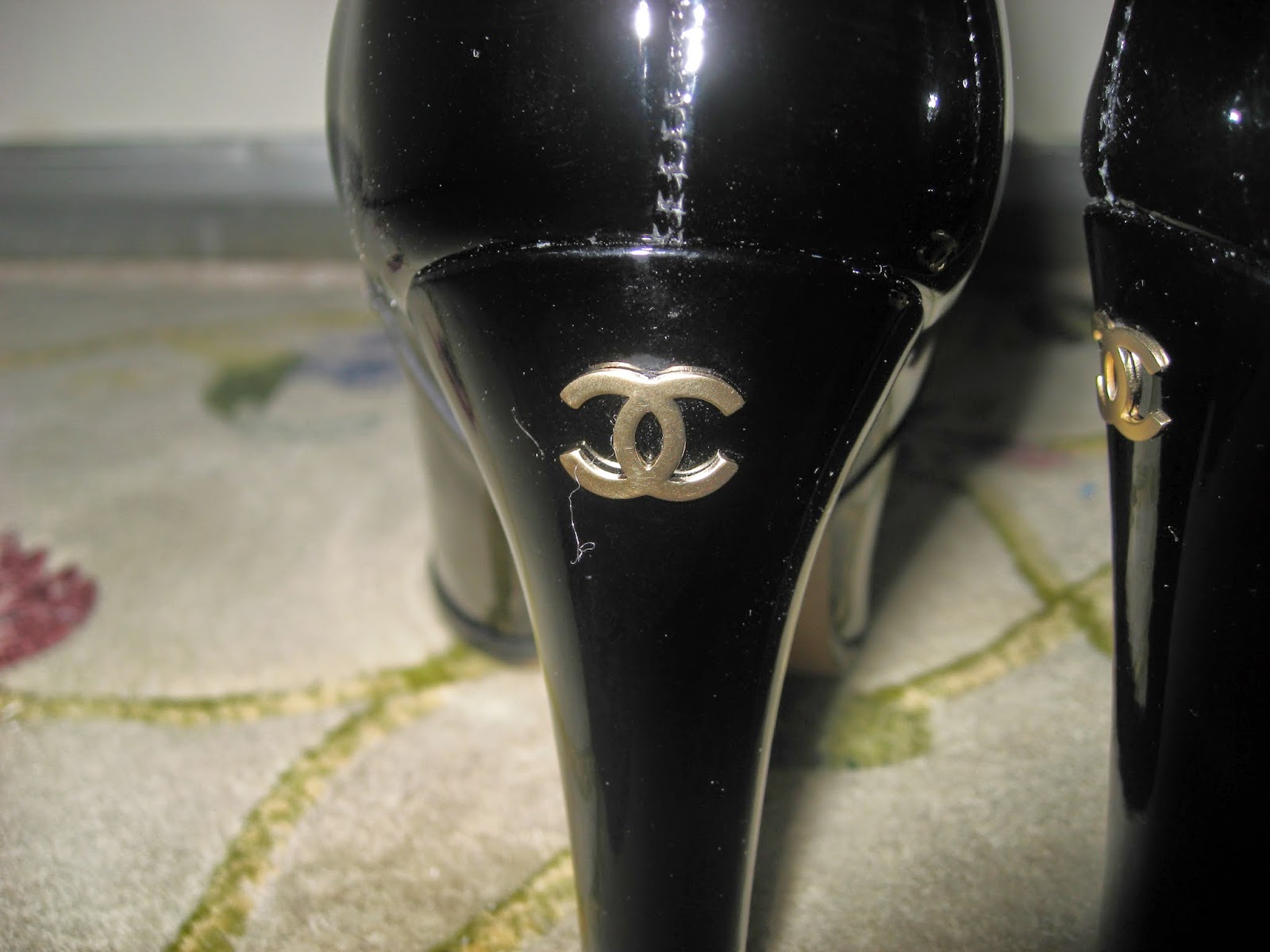 The Chanel logo on the heel
﻿


An interesting side note was the salesman asking me "You're from NY right?"  He then told me that only the NY women buy the boots/booties.  Of course we do, it's freezing and dirty here in the winter and we have to walk everywhere, so we're all running around in black boots and pants.  I was actually momentarily distracted by a fabulous pair of blue suede booties with a black toe and black whipstitching from Chanel, but then I remembered where I live and why I needed black in a material that can withstand the harsh winter.

Anyway, I'm glad booties are all the rage both for practical and esthetic reasons.  I have a long history with booties so I've developed a fondness for them over the years.  When I was in high school flat booties, including the slouchy kind, got really popular, but I wasn't into them until I graduated and decided I had to have a pair to take to college and they had to be navy blue suede and not slouchy.   Don't ask me why, but that's what I wanted.  I finally found them in a shoe store in Montreal while on vacation with my mother.  We had recently disembarked from the cruise from Hell.  The two of us spent a week in a cabin smaller then a prison cell and I was seasick from the instant the ship left the dock.  Finding those booties was like finding a pot of gold at the end of a rainbow.  They went to college with me and then to NYC.  At some point I must have given them away, but deeply regret that.  I keep hoping I will find them in my mother's basement, but so far no luck.  I wish I had a photo of them, at least.

Then there were the simple black Nine West ones in my twenties that everyone had.  They were my first high heeled booties, but thick sensible heels I could do a lot of walking in.  I wore them to death with jeans and struted around looking like everyone else, thinking I was so cool.  I still have them.  They live under my bed.  Also in my twenties were what I'll call 'cowgirl chic' western style booties from Guess in both black and white.  Technically they are more of a shoe boot, because they don't go above the ankle, but I'm counting them.  They were in fashion for a while, but probably more suited for a city like Dallas or Houston, than NYC.  Then again, Western wear has been trying to creep back into the fashion scene here the last few seasons so maybe I'll be wearing them again.  They live on a shelf in my closet and at the appropriate time will probably be sold as vintage. 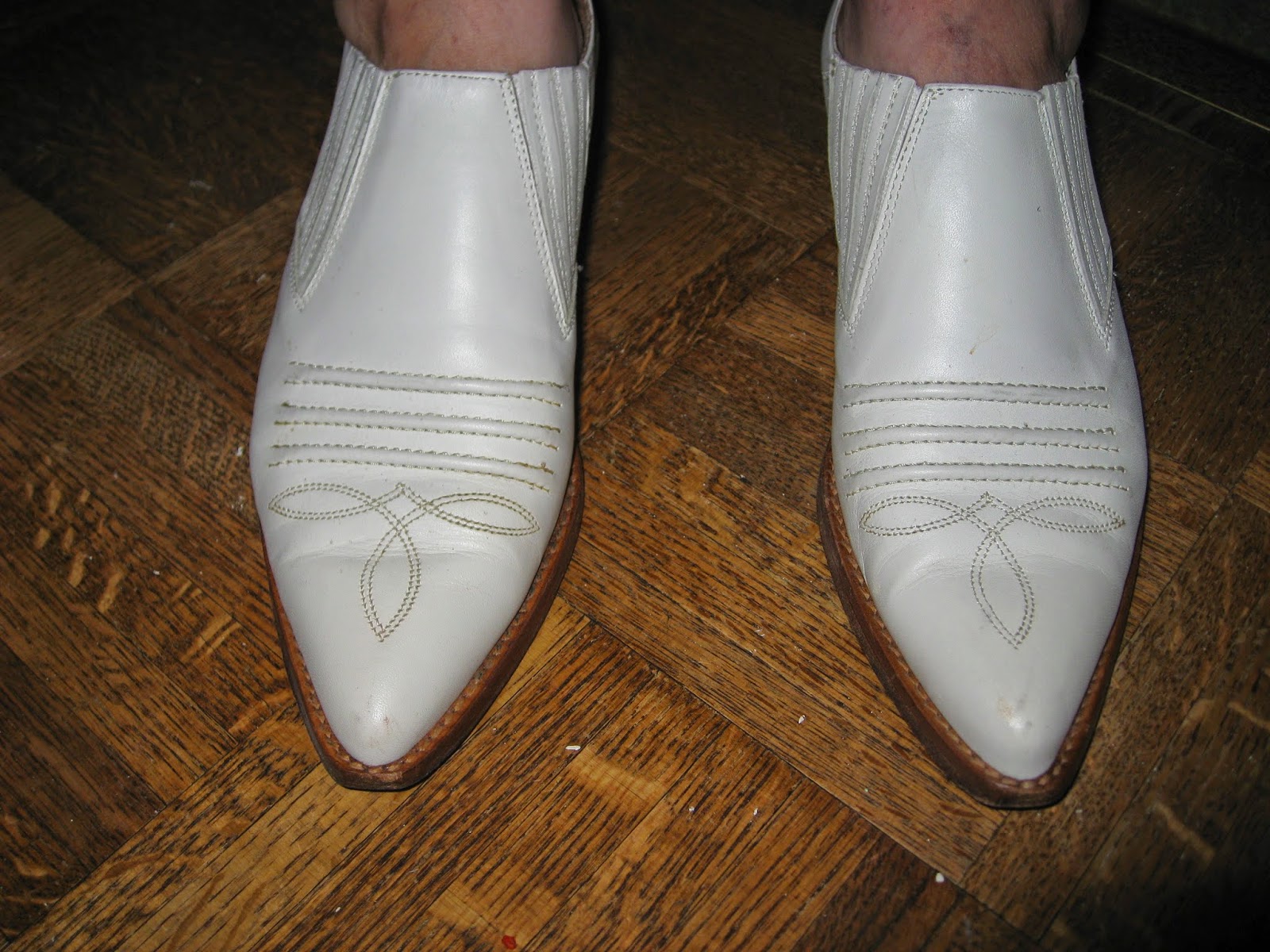 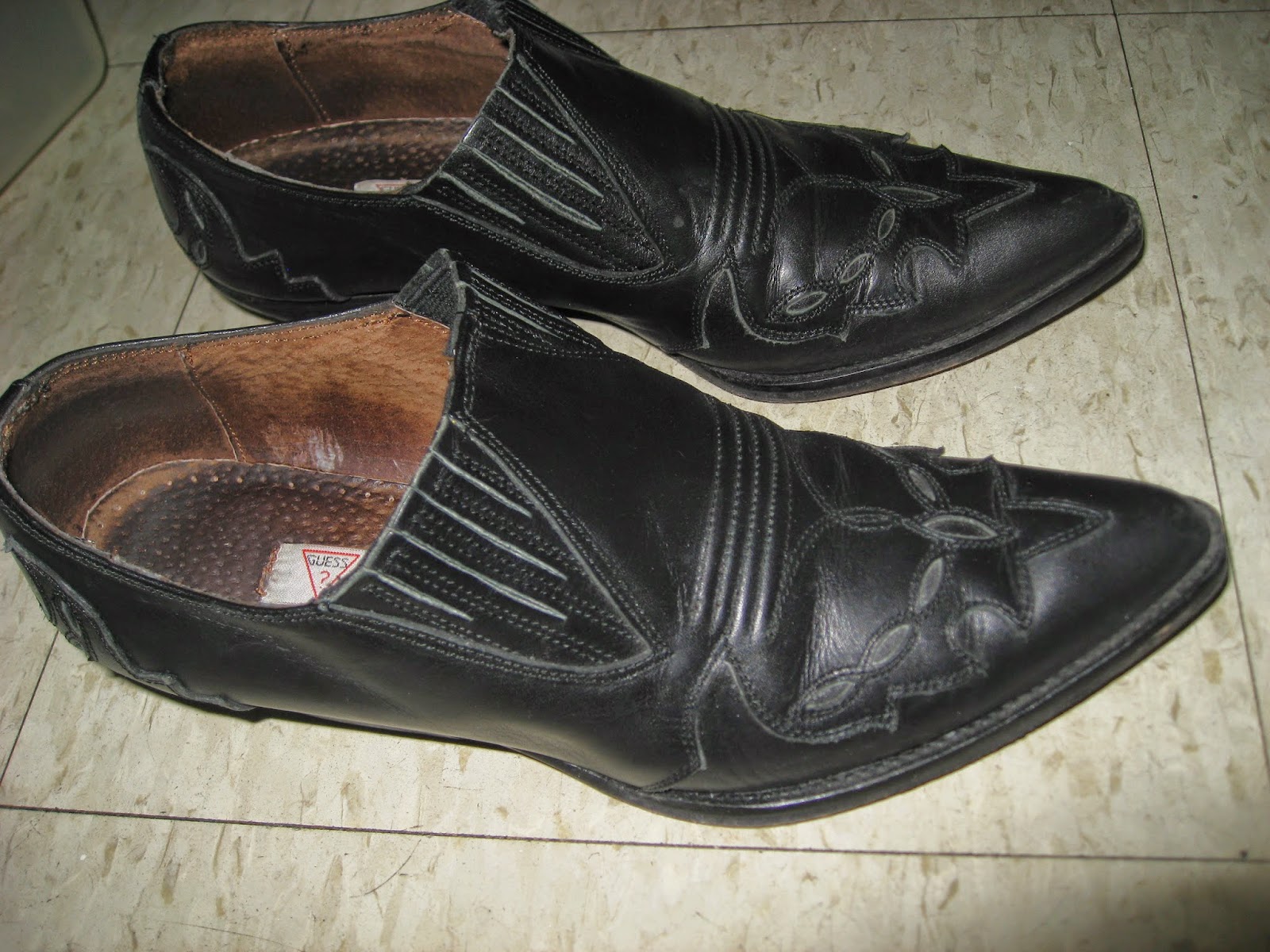 And in black
﻿
Then came the aforementioned Calvin Klein cage booties I would sleep in if I could.  They are super sexy and incredibly comfortable.  I wear them often. 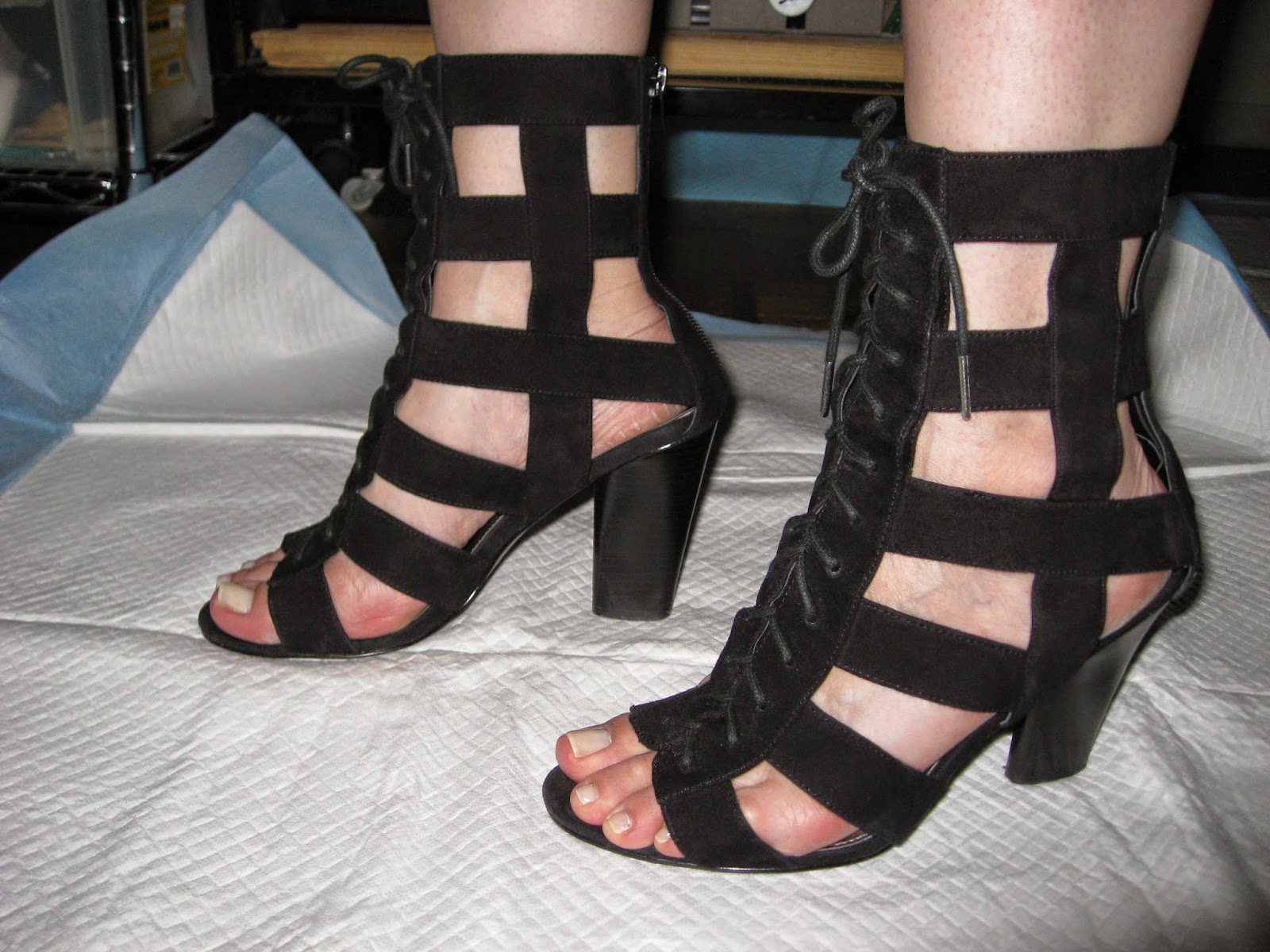 Then I fell for a pair of brown Tory Burch open booties covered with grommets.   There was a big sale at Chuckies, a shoe store in my neighborhood that always has a selection of stylish shoes from high end designers.  Whenever I pass by I stop to peer in the window.  When I saw these I couldn't resist.  I love them still.﻿ 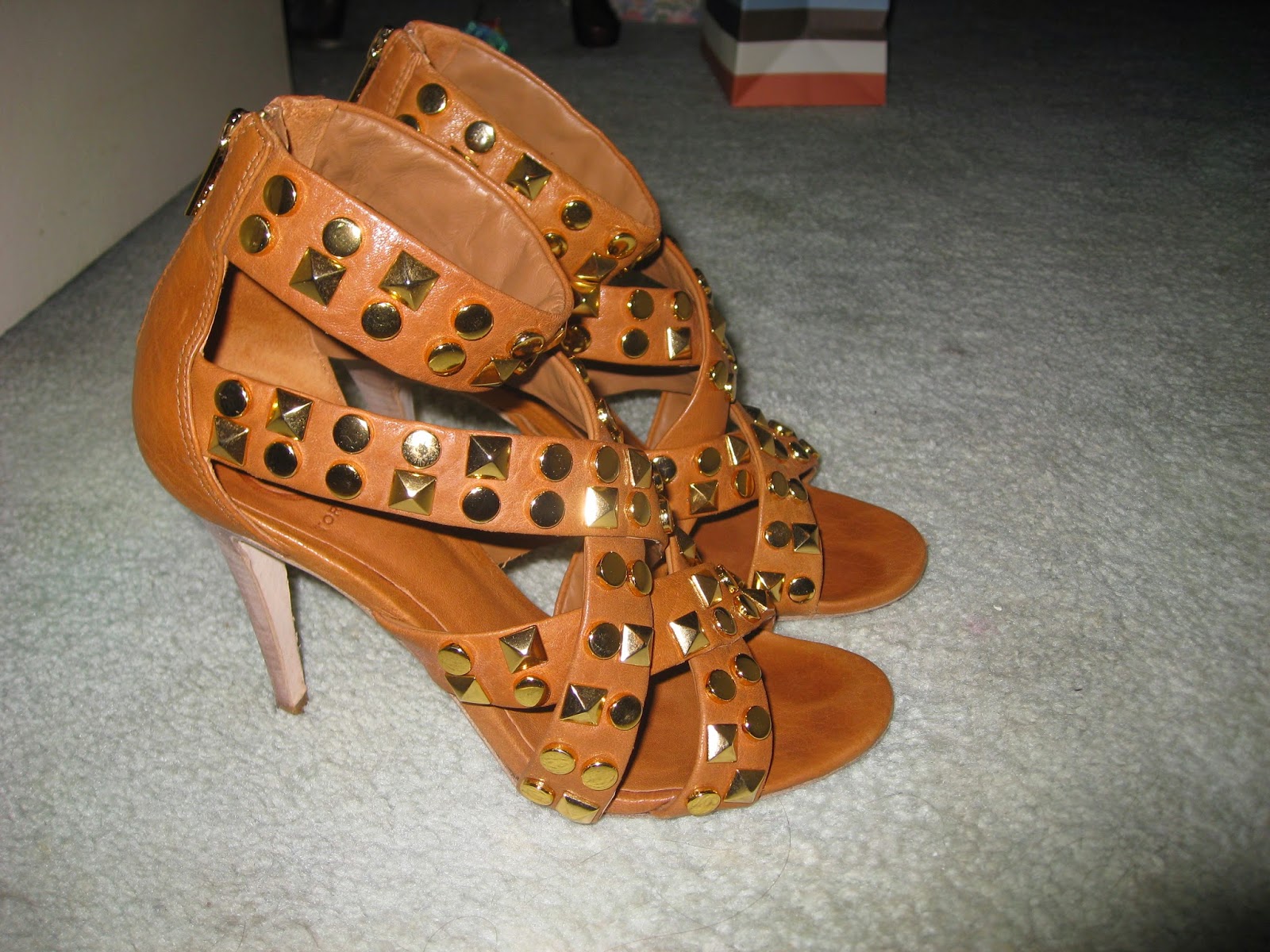 And, finally, I got it in my head that I had to have tan suede booties for those three winter days when the sidewalks are free of snow and ice.  I saw a pair on line that were allegedly Roger Vivier, but when I tried to buy them at the Roger Viver store they told me they didn't make them in tan.  I assumed they were mistaken and the NY store hadn't gotten them in stock.   I then tried to buy them on line and my credit card company informed me that they couldn't complete the transaction because they suspected fraudsters were on the other end.  I was disappointed, but relieved my cc company was so vigilant.  Instead I found a gorgeous pair of tan Gucci booties half price at T.J. Maxx.  They have a very high spindly heel, and I should have known better, but I bought them anyway.  Luckily my friend caught me when I tripped on Madison Avenue in a cocktail dress and went flying through the air.  That was almost two years ago and I haven't worn them since, but now that the fear has subsided I may try again, just indoors only. 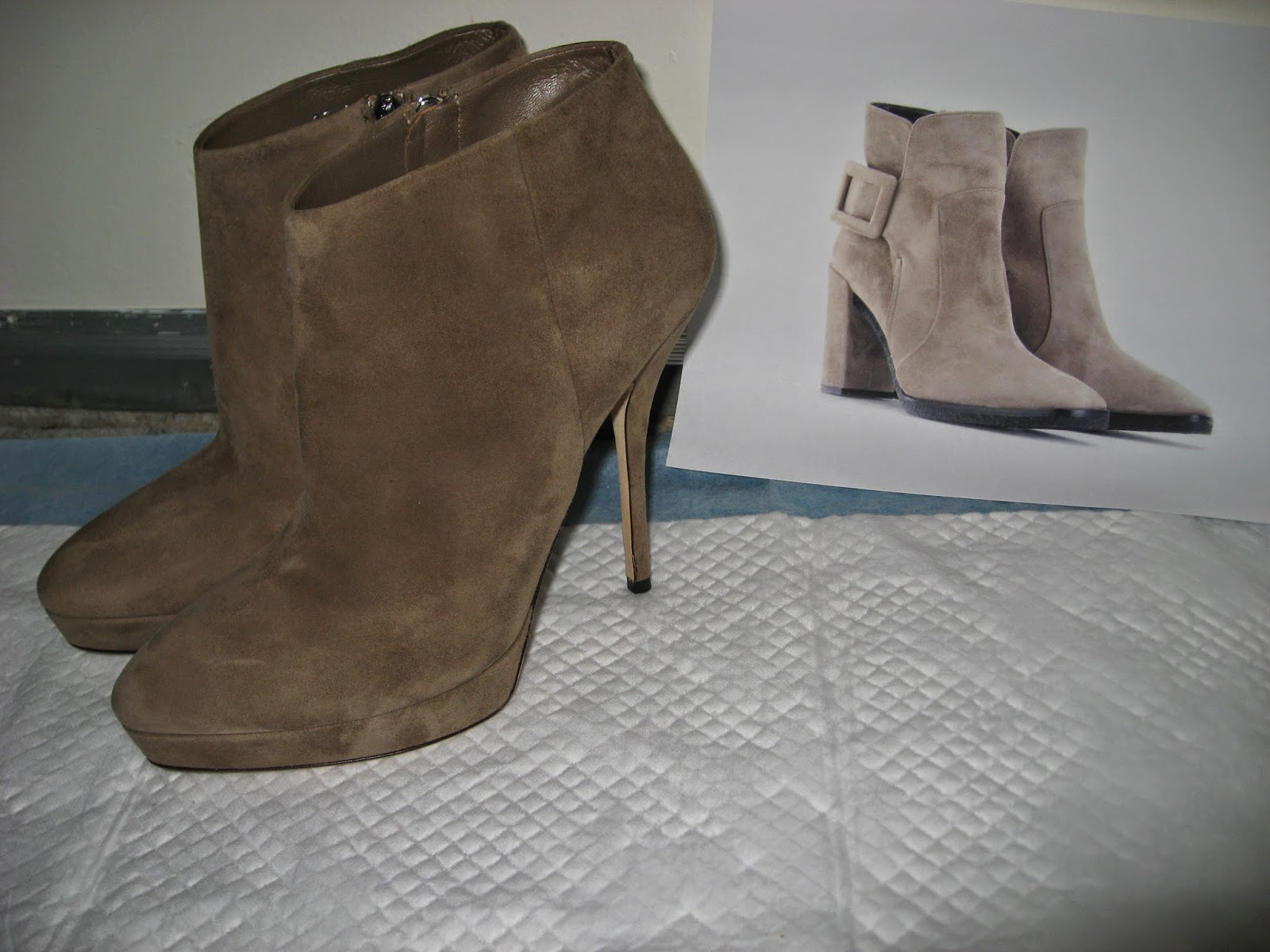 Gucci booties in front, fake Vivier booties in backgroung picture
﻿
Once again, this Fall, like a kid with new shoes on the first day of school, I will hit the streets of NY with my new Chanel booties.  I can't wait!