I love tacos just like everyone else, but as a vegan I've had to modify the ingredients. Instead of ground meat I use a meat substitute called Boca Veggie Ground Crumbles. It's made by the same company that makes Boca Burgers.  Over the summer I used the Boca crumbles to make tacos and I chopped lettuce and tomatoes to make traditional style tacos, but tonight I decided to make a variation and cook all the ingredients together to cut down on the do-it-yourself assembly at the table. The result was simpler -- but just as delicous -- tacos! 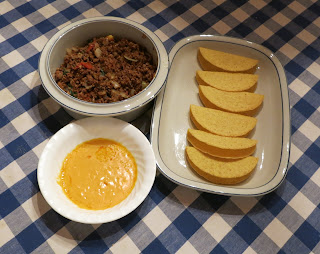 1. Heat oil in skillet
2. Throw in onion first and cook about 10 minutes, stirring frequently
3.  Add in Boca crumble, but first break apart since it tends to clump
together in freezer
4.  Cook Boca & onions together for about 10 minutes, stirring
continuously
5.  Add in spinach and cook another 5 minutes, stir continuously
6.  Finally add in tomatoes and cook until soft, keep stirring!
7.  While cooking the taco filling above heat up the taco shells according
to directions on box.  (Monitor carefully so they don't burn.) This only
takes about 6-7 minutes, so if you want them warm & crispy do this
around the same time you add the tomatoes to the mix.
8.  Heat up Daiya Cheeze Sauce in the microwave for 1 minute
9.  Ready to serve!