The Politics of Fashion With Sheriff Joe Arpaio

Joe Arpaio, also known as "America's Toughest Sheriff" is the sheriff of Maricopa Country, Arizona.  He is known nationally for his hard line stance on illegal border crossing and crime in general.  And, he is also famous for making the inmates in his county wear pink boxer shorts.  Pink is probably not the color of choice if you're a bad guy, especially in the underwear department, but it seems that pink boxers are the accessory of choice at the jail and if you don't like it, well...don't break the law.

What many people don't know about Sheriff Arpaio is that he's also tough on people who abuse animals and that he runs an animal shelter for animals that have been confiscated from their abusers and rescued by the Animal Crimes Investigations Unit.  The shelter, called MASH, is located in one of the jails no longer used for humans.   And, while the evil animal abusers sweat it out in the AZ heat in their pink panties, the innocent animals are housed in the air conditioned jail and tended to by some of the inmates.  The shelter is a no kill shelter and once the animals are taken away from their abusers MASH adopts them out to new homes.  You can read more about MASH and how to donate money to help care for the animals at http://www.mcso.org/mash/ .

I think Sheriff Arpaio is a hero for helping the animals and I've long been a fan.  When I recently got a hold of his cel number and called him up and asked him to send a photo he was kind enough to oblige. 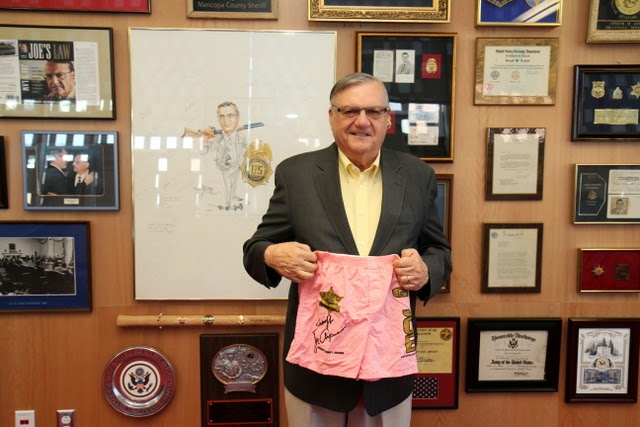