My favorite gala of the year in NYC is the party at the Central Park Zoo to benefit the Wildlife Conservation Society.  The event is held in mid June and, if we're lucky and it's not raining, it's a beautiful night under the stars amid the animals who come out to play with us during the cocktail hour. I love all animals and I am a huge proponent of preserving wildlife and endangered species and I never miss a chance to talk to the animals. 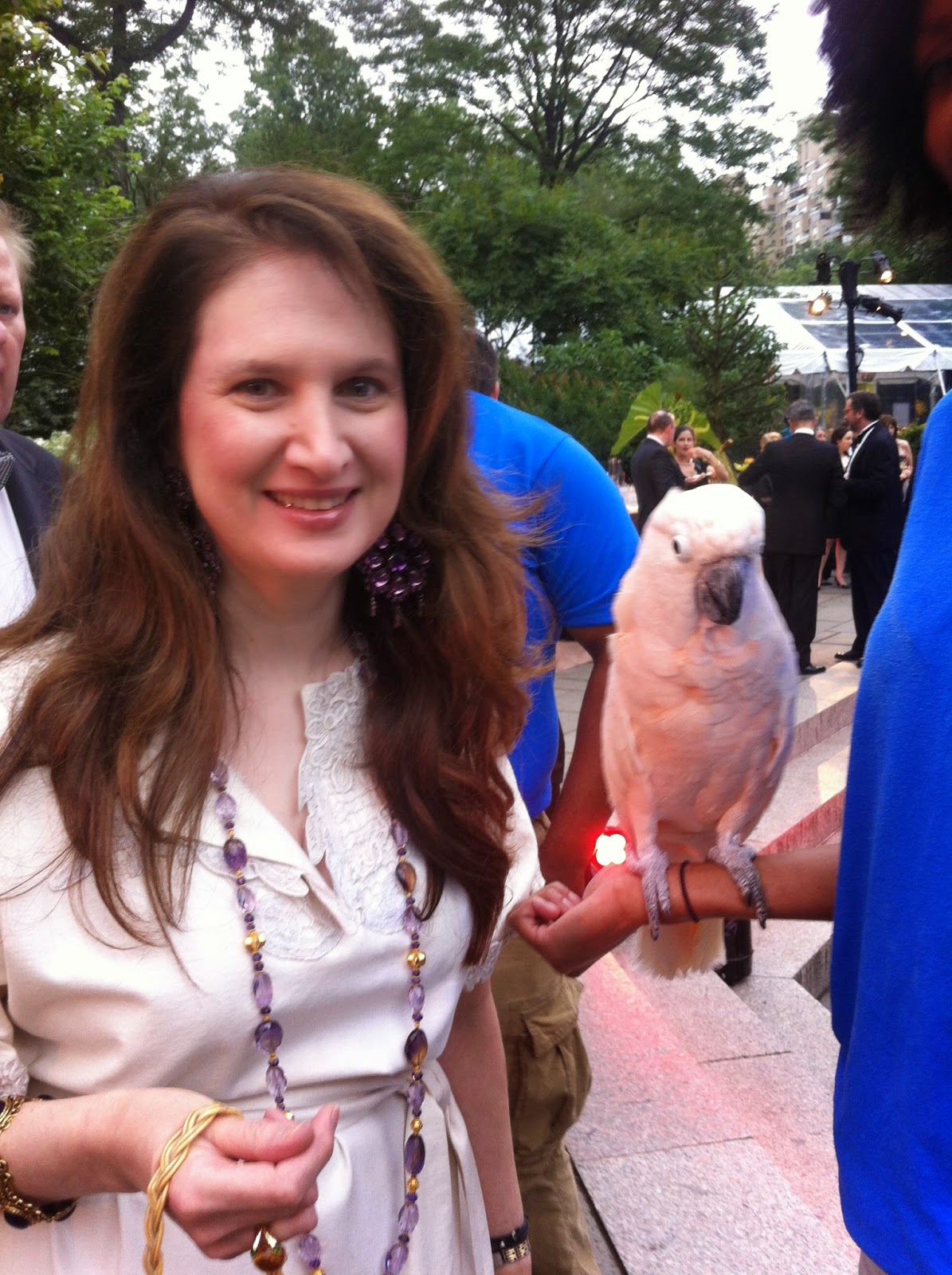 Me with Zac, a female Moluccan Cockatoo at the zoo benefit
(photo courtesy of Daniel Colon)

Zac was very shy at first, even though I had met her last year at the party, but I have a cockatoo (I have two parrots) so I used my best cockatoo voice with her and she warmed up pretty quickly and talked to me. Zac is beautiful and very sweet. In addition to Zac we met an American Crododile that I got to touch, a giant lizard that stuck its tongue out at me, a sloth that was moving around way more than sloths normally do, and a fennec fox that was very soft, like a kitten. 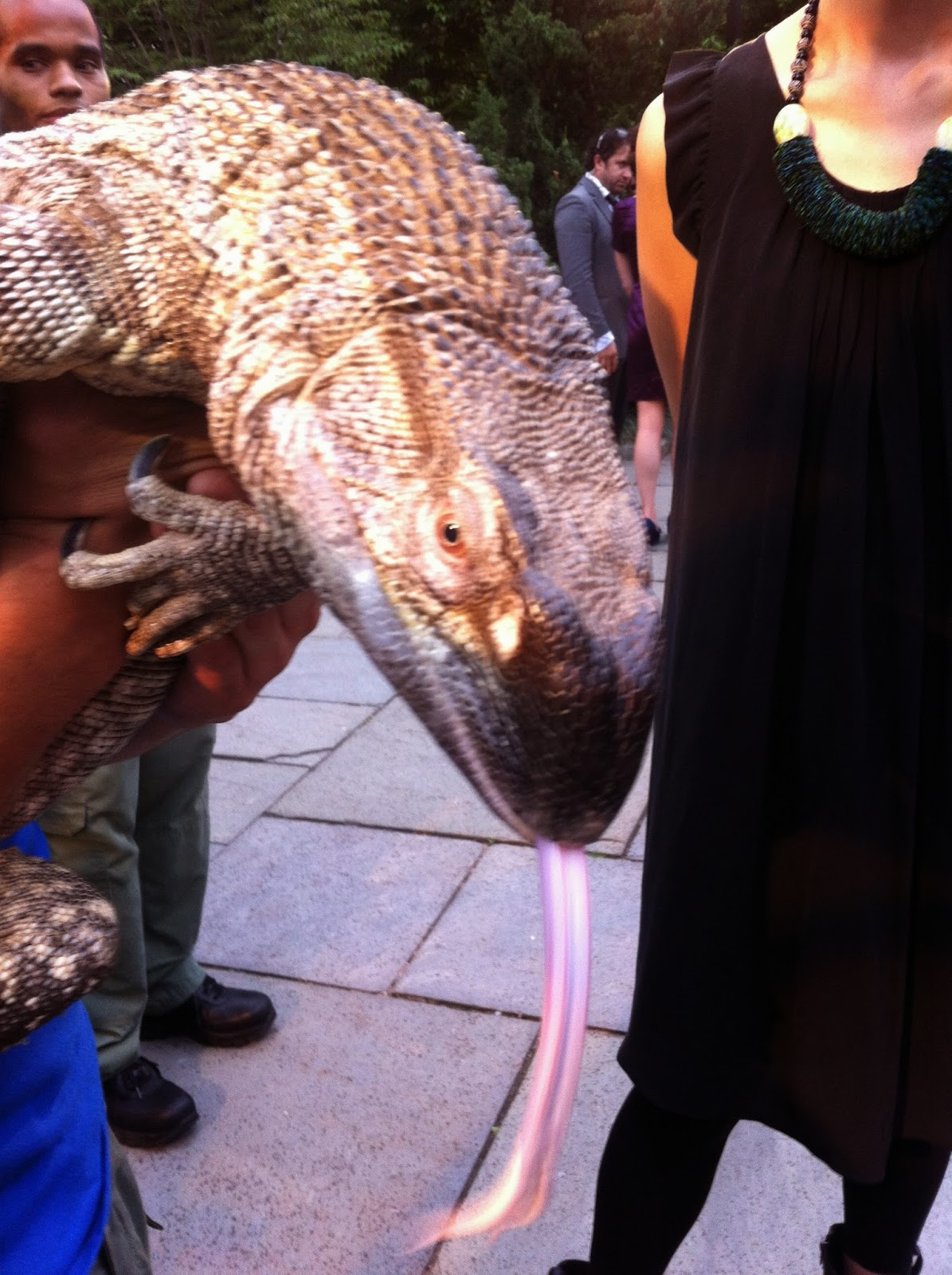 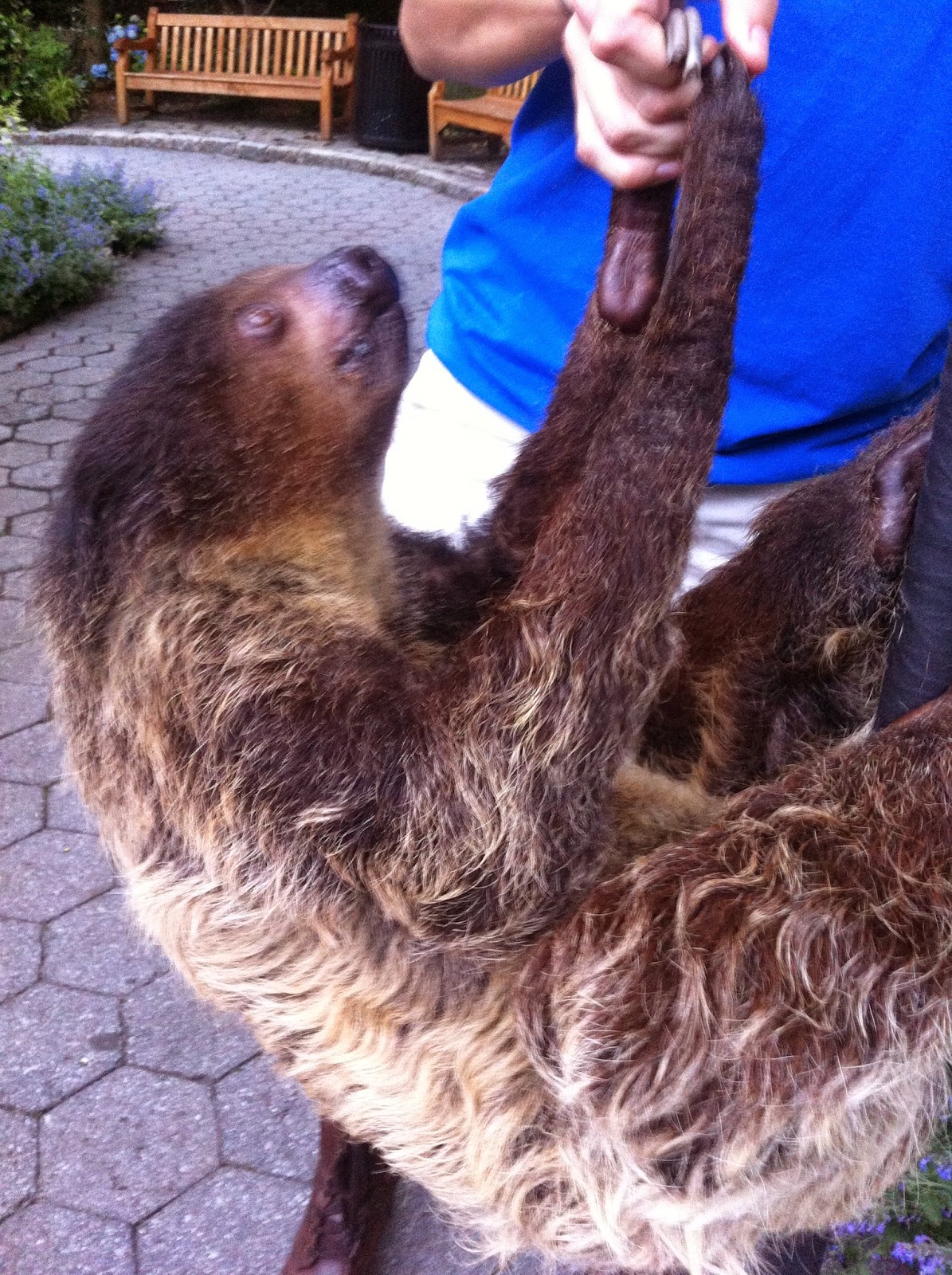 Because this event is at the zoo many guests try to incorporate some sort of animal or jungle theme into their attire like a zebra print dress or a bow tie with monkeys on it.  I happen to have a collection of vintage wicker figural bags that I started collecting as a kid, most of which are animals, and the zoo party is the perfect place to carry them.  Many times my bags and I have ended up in the Styles section of The New York Times.  So many times, in fact, that a few years ago I decided to retire them, because I didn't want to it to seem like I was just trying to get my picture taken. 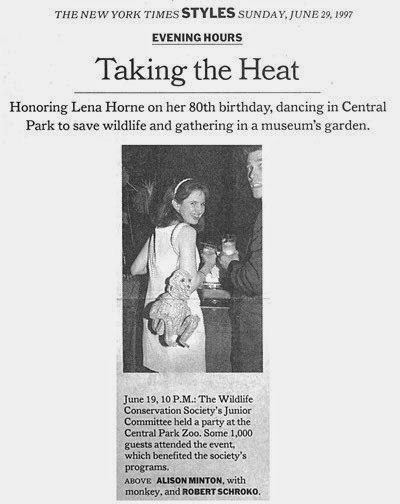 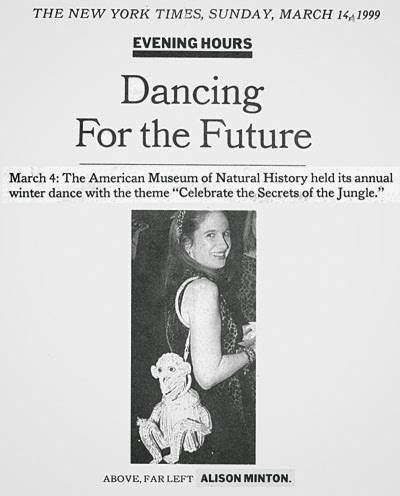 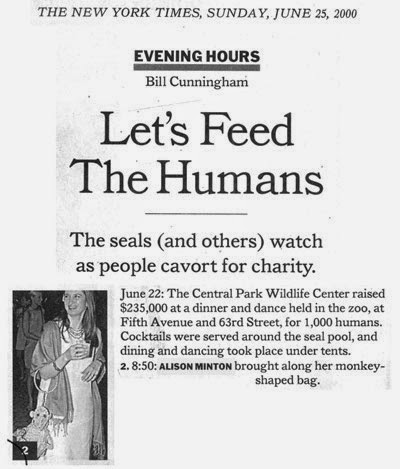 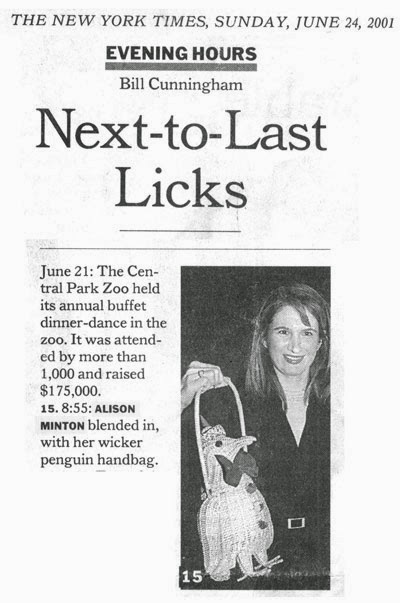 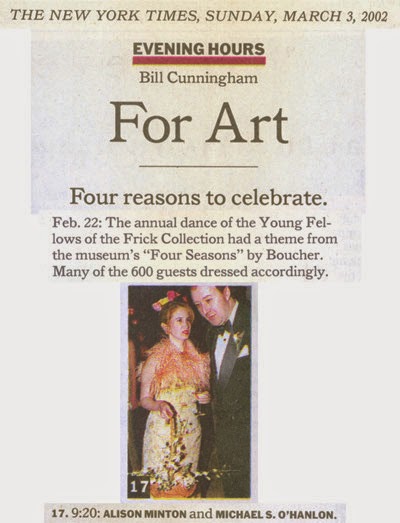 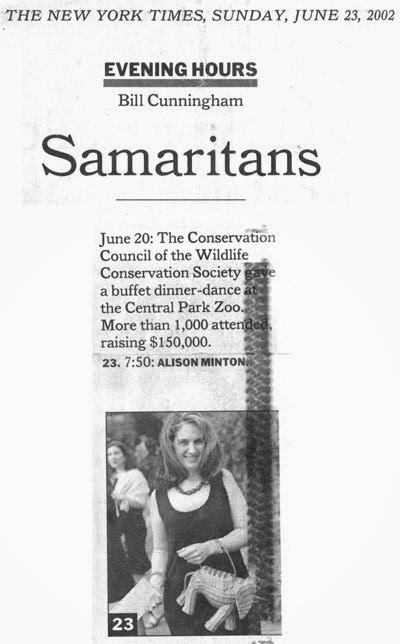 My bags in The New York Times.

I have also been thinking about selling the collection, because the bags are dust collectors and wicker tends to get brittle and break easily as it ages.  And, worst of all, the aforementioned cockatoo of mine has taken a shine to them in recent years and likes to fly by them and knock them to the floor.  But, since it has been a while since I carried any of them, I decided to carry my polar bear bag this year. 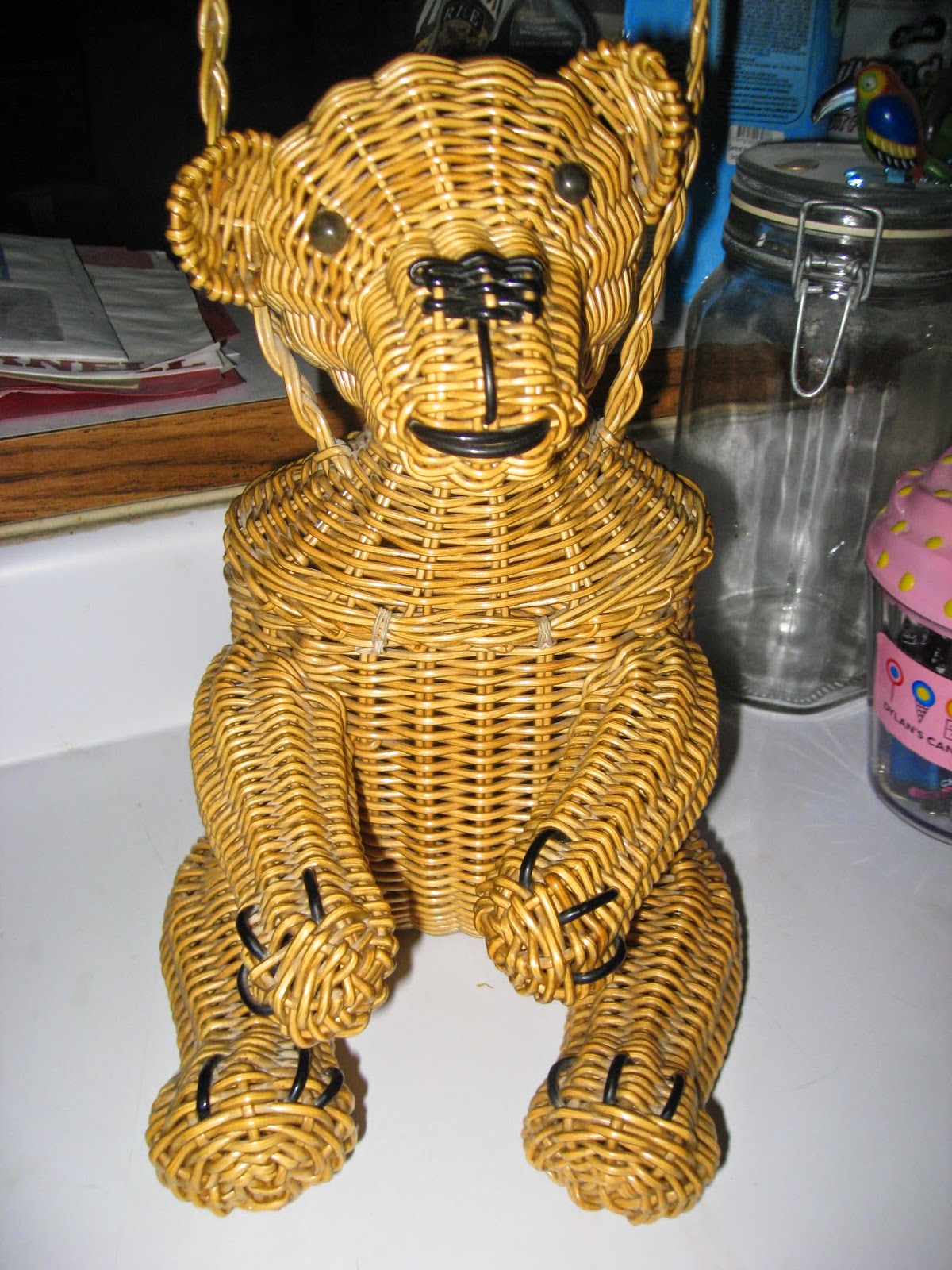 The bag was a huge hit and a fun conversation piece.  I think it may also have been why that lizard stuck its tongue out at me.  Anyway, the bag, my buddy and I ended up in The New York Social Diary today! Here's the photo and the link with a great write up about the event.  http://www.newyorksocialdiary.com/node/1912301 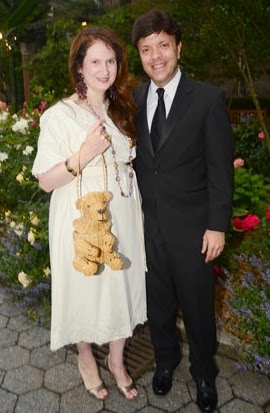 Me with the polar bear bag & my friend, Daniel Colon
(photo courtesy of Patrick McMullan via the NYSD)

Now, getting to the politics of the situation:  this year's gala was about the plight of the African Elephants and how poachers are, disgracefully, hunting them to extinction.  The conditions have gotten so dire that the Wildlife Conservation Society decided they needed to call in the big guns (no pun intended) and they asked The Clinton Foundation to get involved to help spread the word and bring some attention to this horrible situation.  The Clintons did get involved and the other night Hillary and Chelsea Clinton were honored for their work to try and help save the elephants.  Former President Bill Clinton was also in attendance to support his wife and daughter.  New York City Mayor Bill De Blasio was also there and he introduced Hillary Clinton who then spoke about the plight of the elephants. Thankfully the evening was non-partisan and the politics were put aside to benefit elephants.  Despite the Democratic headliners, I suspect that many in the well to do crowd were Republicans, and in fact, I spotted a very well known Republican supporter, David Koch, in the crowd.  Saving our wildlife and our planet is a must for both sides of the aisle and it was a fun evening when everyone joined together for this important cause. The Clintons and Mayor De Blasio were surprisingly photo accessible and we took full advantage of that!  We even had a conversation with the Mayor and I took the opportunity to thank him for all he is doing to get the poor, overworked carriage horses off the streets. 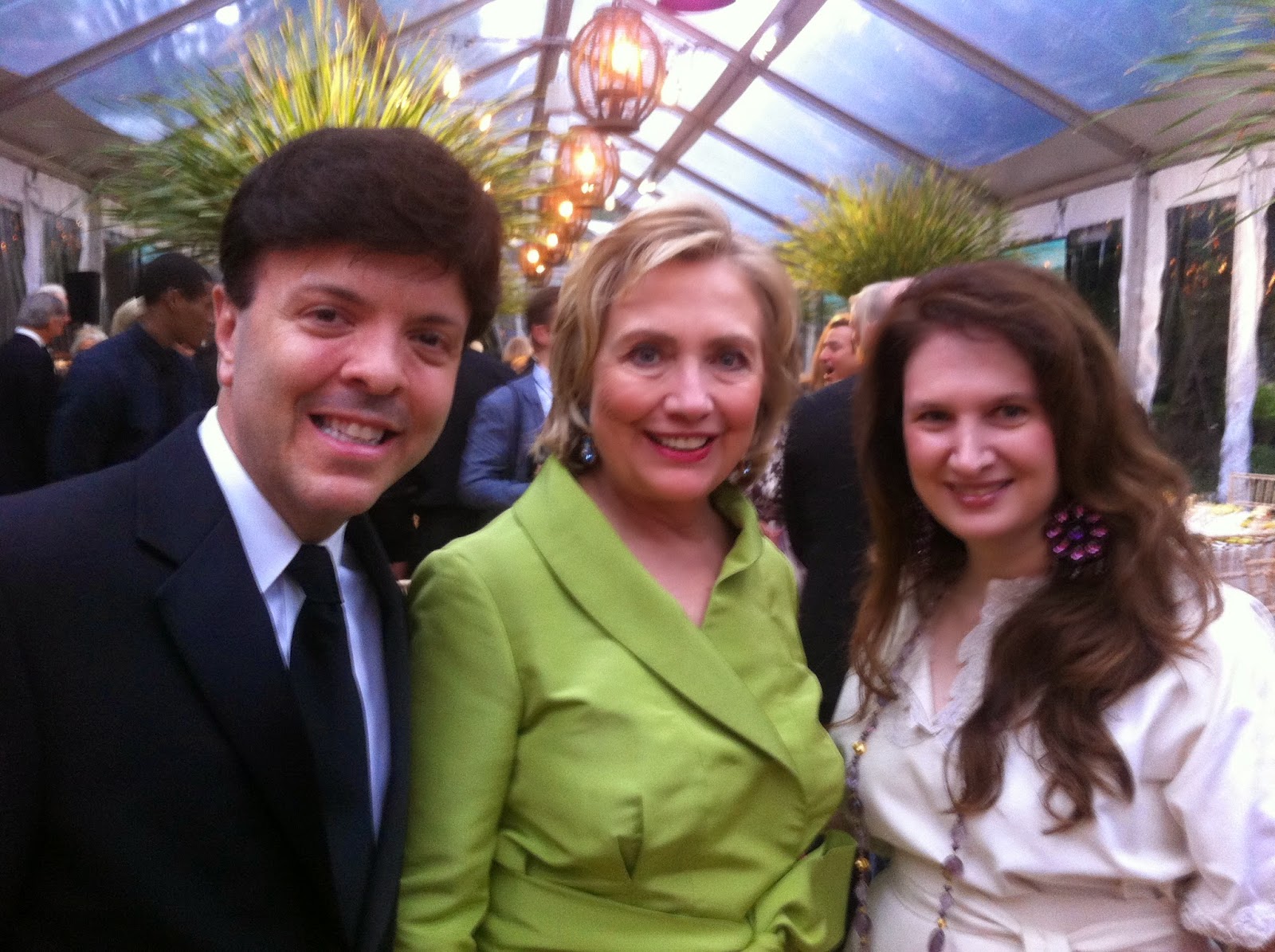 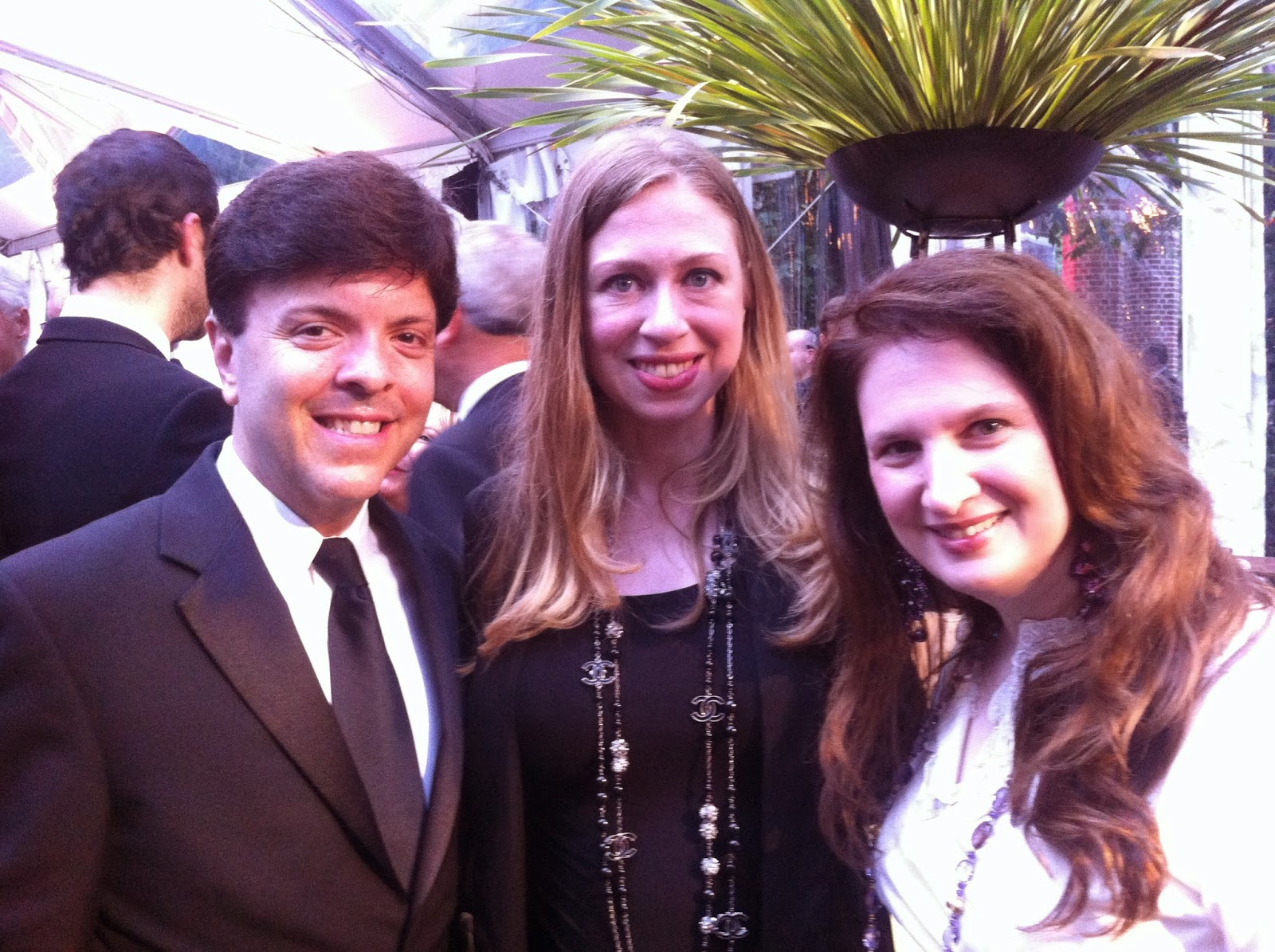 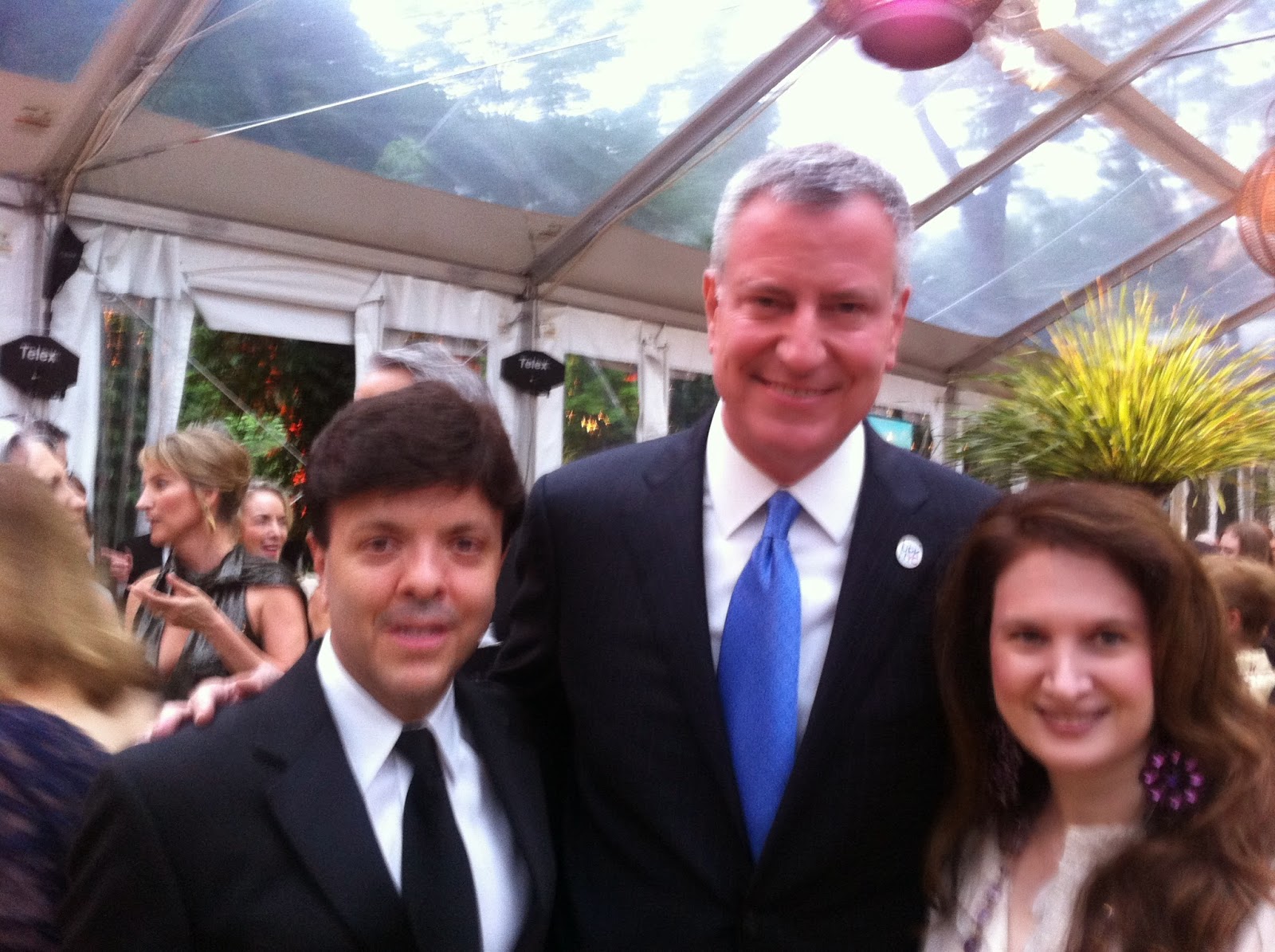 And, it turns out the polar bear bag was a good neutral, apolitical choice for the evening.  I do, however, have a Democratic donkey bag and a Republican elephant bag, that even came with its own politcal buttons.  It must have been a convention souvenir.  So, if I'm ever invited to an inaugural ball in Washington DC I'll be ready. 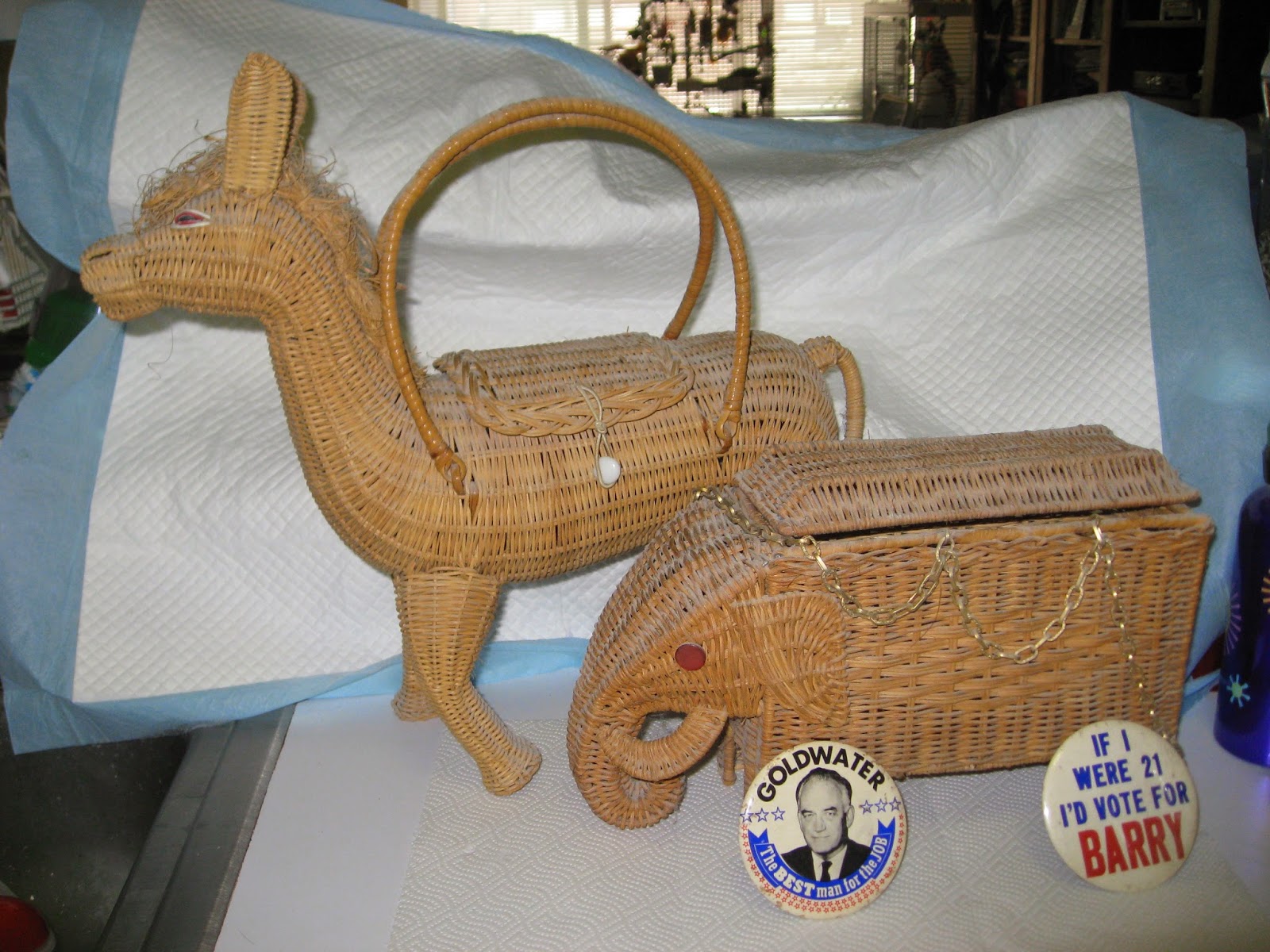