I attended a private luncheon and tour of Bulgari's Heritage Collection at their New York store yesterday.  The event was organized for a small group of women on the Bruce Museum's benefit committee.  I had a great time chatting with the ladies I know and also meeting new people.  Bulgari did such a nice job with the luncheon and the tour.  The staff was so gracious and welcoming. 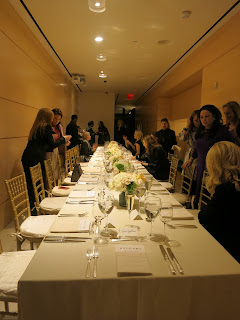 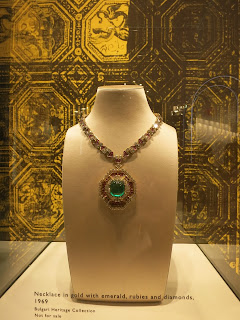 In addition to Bulgari's stunning gemstone jewelry, they are also known for their coin jewelry, made using authentic antique coins.  I don't have a Bulgari coin necklace, or any other Bulgari necklace, but I have an antique gold coin necklace that has been in my family for five generations.  It originally belonged to my great-great grandfather, Joseph Bloomingdale, the co-founder of Bloomingdale's department store.  It has been passed down generation to generation and was given to me when I was a teenager.  Joseph Bloomingdale gave it to his daughter, my great grandmother, and her husband, my great grandfather used to wear it.  He was a lawyer in NYC, but was the mayor of Deal, New Jersey, which was a seaside resort a century ago where the family had a summer home.  I think he probably wore the necklace while on official mayoral business (let's hope) and not as an every day adornment.  I remember my grandmother had a photo of him wearing the necklace.   It's kind of cool to have that history associated with something tangible that I can hold in my hands.  I have only worn the necklace on a couple of occasions.  I'm too nervous to take it out.  Most of the time it has been locked in a safe or safety deposit box, mostly because it's a family heirloom and I would be devastated to lose a piece of family history.  But, I decided that lunch at Bulgari, famous for their coin jewelry, would be the perfect place to wear it.  It is now safely packed up and back to its secure location, waiting to make an appearance in another twenty years. 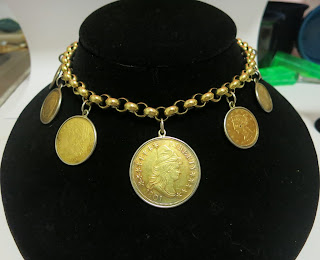 The coins are all very old, from the 1700's and 1800's, mostly US, but one or two from France.  It was actually a great idea to take these collectible coins and turn them into a piece of jewelry.  An idea that Bulgari obviously had as well.  If you have an old coin it's a fun idea to have it set and added to a chain.  In a couple of generations, it will be an heirloom piece to pass along, too!