I "discovered" a new jewelry designer yesterday and I'm already obsessed!  I was in between appointments and had a few minutes to kill when I passed by a jewelry store. In the window was a pin that I had photographed the night before for my NYSD column. The pin's owner had told me she got it on Lexington Avenue and I went inside to see if that was, indeed, the same store.  It was and now I have store information for my column, which is good.  But, the store itself is an amazing little gem!  It's called Baron De Limoges and they have very unique costume and sterling silver jewelry, and almost all of it statement pieces.

Something else I noticed in the window were two colorful bugs pins.  I really do not like most bugs (except the butterfly and lady bug types) and consider myself quite bug phobic, but for some reason I do like bug pins.  I asked to see the pins and learned they were made by a jewelry designer named Philippe Ferrandis, who previously worked for Givency and Nina Ricci.  I ended up buying one of them to add to my little collection of animal/nature pins.  It's some kind of flying bug, because it has wings. 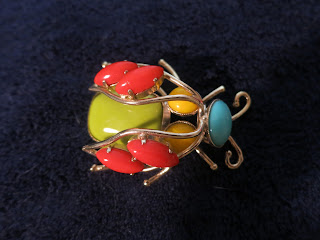 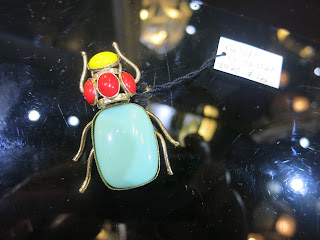 The pins were made in France and are marked, which is important if you are a collector. 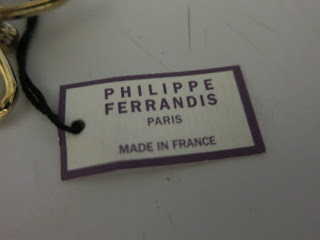 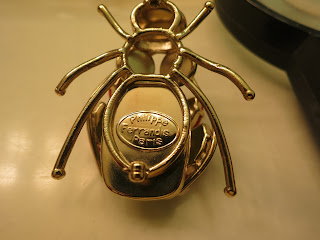 They had a book about Philippe Ferrandis and I asked if it was for sale, but unfortunately it wasn't. I'll have to find it somewhere else.  I'd like to learn more about him and his designs. 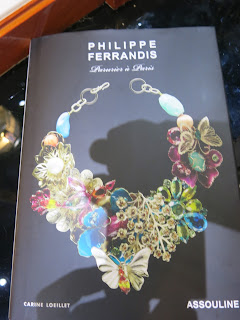 Former Secretary of State, Madeleine Albright, has a massive collection of pins and when she was in office as Ambassador to the United Nations and later as Sec of State she used to wear various pins as a diplomatic tool to communicate her mood and send messages to the different world leaders with whom she had to meet.   For example, after the government controlled Iraqi press called her a serpent she wore a serpent pin to her next meeting with Iraqi dignitaries to send a message.  (I'm guessing the message was "go to hell," but she doesn't say that.)  And, Vladimir Putin apparently told Pres. Bill Clinton that he would check Albright's pins to see what message she was sending.  So, if you see me wearing my new bug pin the question will be if I'm trying to tell the world "don't bug me!" or if I just wanted to wear a colorful piece of jewelry.