I was at the Central Park zoo last night for their annual gala and even though I was there just as press this year I decided to dress in fun zoo themed clothes.  I've been going to this event for years, but as one of the paying guests.  This time around it was strictly for work.  I wore a zebra print jacket and carried a vintage wicker bag shaped like an elephant.  I thought if I looked the part I might attract the attention of other people with zoo themed accessories that I could photograph and my strategy worked. I had so much fun talking to people about our mutual animal accessories. Some of them even took my picture, including the director of another zoo who was at the gala.  She and I both had thematic bags. My elephant bag had a little surprise inside that thrilled everyone I showed.  I bought this bag on Ebay about fifteen years ago and it came with two political buttons inside from the Barry Goldwater presidential campaign in 1964.   That was before I was born, but many people in the crowd at the zoo gala were a bit older and they remembered well and got a real kick out of seeing the pins.  The bag was a convention souvenir or accessory that was carried by a Goldwater supporter. 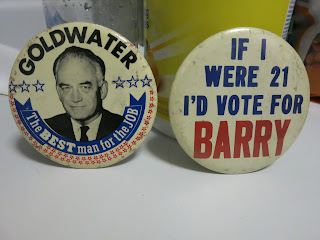 Political pins that came with my bag

I've been thinking of selling this bag in advance of the Republican National Convention this summer and funny enough someone last night offered to buy it from me (not at the zoo gala, but when I met up with some friends afterwards).  But I think Donald Trump should buy it for Melania to carry in July.
Posted by Alison & Barbara at 8:17 AM