I love Hermes scarves, bracelets, bag, etc.  Nothing disappointing can ever come in one of their orange boxes.  I have several of their beautiful scarves, some were gifts and some I bought myself, but I rarely wear them, because I just don't know how to tie a scarf to look lux and not matronly.  I'm much more likely to wear one of their enamel bracelets that has the same scarf patterns.  I recently decided that I need to learn to tie scarves, so I've been practicing with a scarf tying book I bought.  I intend to become an expert at this in time!  But for now I've mastered tying a long rectangular scarf into a bow, which has gotten me quite a few compliments and I'm ready to make my headscarf debut with an Hermes triangular scarf.

Yes, you can fold a square scarf into a triangle, but in 2007 I was in Hermes and they had a triangular scarf.  I thought it was cool and unusual so I bought it.  The box is a special triangle shape, too.  Of course I never wore the scarf, but now it's going out to a party in a couple of weeks.  Here is what it looks like and photos from one of my practice sessions.  I think I look a little bad-ass and I'm okay with that! 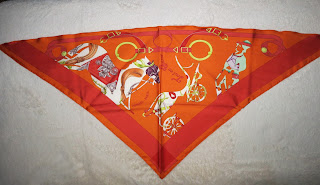 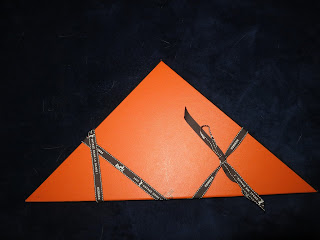 This has to be the coolest box at Hermes

Hopefully I will look like a bad-ass and not just an ass at the party, but I think it's fun. 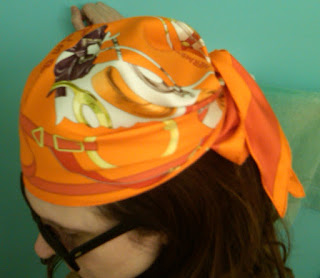 I need a little more practice to get the top flat, but getting there 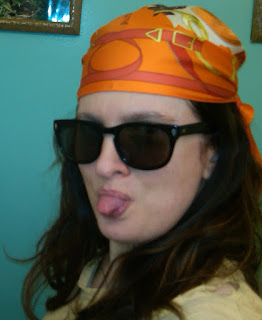 Getting into the spirit of it