This month both Town & Country and In Style featured articles about the Fendi baguette bag.  There is a new book out about the bags called Fendi Baguette.  You may recall how popular the baguette was on Sex & the City.  Well, I have a personal baguette story to share...about five or six years ago I saw a beautiful baguette bag featured on the pages of Town & Country and I hightailed it over to the Fendi store to check it out.  As is often the case, the bag was featured in a magazine prior to reaching the store, but the salespeople were nice enough to do a little research and they located the bag in their showroom in NY.  Unfortunately, it was in bad condition.  It seems a certain current reality tv star, now the ex-wife of a famous author with a then fatwa on his head, had borrowed the bag and somehow it was then not in sale-able condition.  No word as to whether the damage occurred while in her possession or afterwards, but they wouldn't sell it to me and they couldn't get another one because it was the only one of its kind, at least in the US.  I was very disappointed, so they offered me an elusive Spy bag instead. The Spy bag had just come out and allegedly had a four month waiting list even for celebrities.  I turned down the Spy bag, only to go home and realize what an idiotic move that was.  (Oh, the bags I've turned down and regretted later and the bags/accessories I've given away and regretted later....but that's another post for another time.) I then called Fendi and said I wanted the Spy bag, but it was gone........they ordered me another one and I carry it to this day as my staple black bag.  But, I digress....

Back to the baguette:  I still wanted a baguette so I ended up buying two that I thought would be collectible.  I still use them on occasion, but for now they are permanent features in the Minton accessories collection unless I decide to sell one.  After all, they were purchased as investments..... The detail is really spectacular and I'm glad I purchased them back then, because I can only imagine what a baguette costs today.  A stroll over to the Fendi store to investigate and buy the book may be in order.... 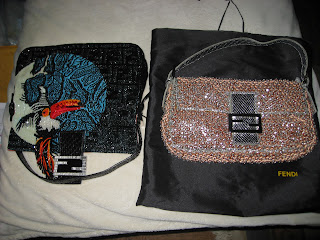 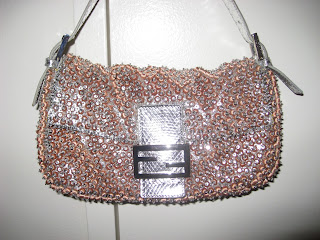 My favorite, the ultra glam baguette 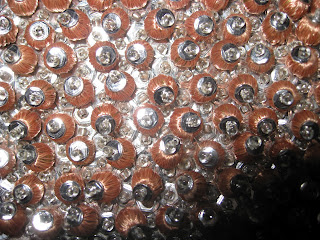 Close up of the beads that cover the bag 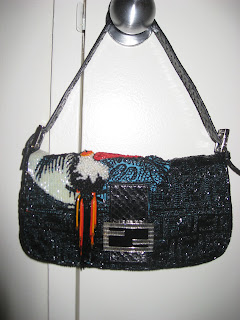 How could I not buy a bag with a bird on it? 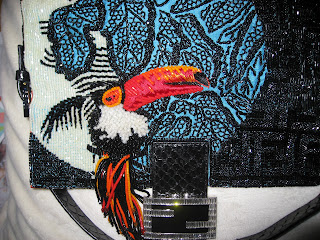 If you look closely you can see the signature interlocking F's in the black section
Posted by Alison & Barbara at 9:26 AM